A legacy carved in stone 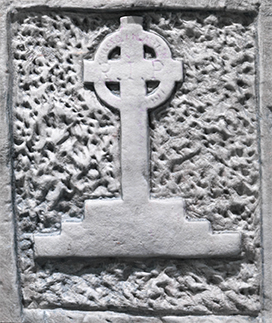 In the shadow of the Vimy Memorial in France lies a Celtic cross carved in soft stone. Both are monuments to Canadian soldiers who died in the First World War. But while one looms solemnly over the French countryside, the other is hidden in a cave beneath a farmer’s field.

The cross is a highlight of Preserved in Stone – Underground Art of the First World War, an exhibition of photographs and 3D reproductions of artwork and graffiti left behind by Canadian troops preparing for the Battle of Vimy Ridge in 1917.

“The Allies used a network of old chalk quarries and connecting tunnels to move and shelter troops closer to the front lines,” says Canadian War Museum historian Dr. Stacey J. Barker, curator of the exhibition. “Untouched for close to a century, these largely forgotten spaces of the war are now revealing the thoughts and preoccupations of homesick and anxious men awaiting their turn in the trenches.”

The Celtic cross is a memorial to Privates James MacPhail, 37, a Scot who enlisted in  Calgary; Thomas Whyte Milliken, 29, a teacher from Strathroy, Ontario; and John “Jack” McKague, 23, from Huntsville, Ontario. The three members of the 15th Battalion (48th Highlanders) were hit by shellfire and killed in March 1917 as they travelled to the Maison Blanche cave.

“Once the 15th Battalion arrived at the cave, a fellow soldier — we don’t know his name — commemorated the loss by carving this Celtic cross,” says Dr. Barker. “This simple, poignant act demonstrates the strong desire to remember and mourn fallen comrades.”

Elsewhere, a functioning letterbox carved by William Beckett and Thomas Mason, also of the 48th Highlanders, signals the importance of mail as a link to loved ones back home. Another carving commemorates the Allied victory at Vimy Ridge. The artist, Sgt. James Robert Babcock, earned the Distinguished Conduct Medal for single-handedly capturing a German officer and 41 troops, and marching them out of a cellar at the point of his bayonet.

“These soldiers were in a war zone, acutely aware that they could be killed at any time, so while some of the marks were made out of boredom, there is a deeper layer of meaning,” says Dr. Barker. “Maple leaves and regimental insignias speak to the importance of the men’s identity as Canadian soldiers, while other seemingly mundane images — human faces, farm animals — reveal a longing for home.

“Even crudely scratching one’s name and service number in the wall was a way of saying, ‘I was here. I took part in something significant and dangerous and historically meaningful.’ It was their way of not being forgotten.”