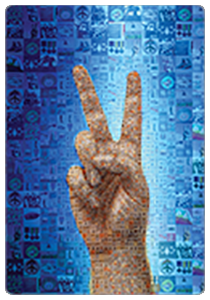 Corporal Patrick Kègle was homesick during two ground operations in Afghanistan. To feel a little closer to his home back in Quebec, he sometimes listened to the group Les Charbonniers de l’enfer. One day he decided to write to them — and the partner of a band member wrote back. Thus began a fascinating and unlikely exchange about the presence of NATO forces in Afghanistan.

The book En terrain miné (“In a Minefield”) recounts the correspondence between anti-military author Roxanne Bouchard and Corporal Patrick Kègle of the Royal 22e Régiment, then deployed in Afghanistan. Amber Lloydlandston, the historian behind the current War Museum exhibition, Peace – The Exhibition, finds this correspondence fascinating. “What’s remarkable,” she says, “is that it presents two of the diametrically opposed points of view that Canadians have about peace: the need to take up arms in order to achieve peace, and the need to pursue peace by other means.”

As the conversation develops, each correspondent’s position is slowly softened by the other’s arguments. Against all odds, this “cross-fire” of letters ultimately seals a friendship that is both powerful and enduring.

The experience caused Roxanne Bouchard to reassess her movie image of soldiers as bullies “who shoot at anything that moves without really knowing why.” Instead, she discovered a soldier who was sensitive, thought deeply about the reasons for his mission, and was aware of the issues in the region in which he found himself. To her great surprise, Patrick proved to be cultured, fond of music, and even able to speak a few words of Pashto. As a result of their correspondence and friendship, Roxanne stopped blindly protesting military conflict, instead taking a keen interest in countries at war and seeking to understand the reasons behind their conflicts.

As for Patrick, he is all too familiar with the true face of war. He has seen women, children and other civilians killed, victims of their regime. He has seen his comrades-in-arms — men with families like him — blown to pieces by improvised explosive devices before his very eyes. Sometimes there is no choice but to take up arms in order to combat inhumanity and restore peace. First and foremost is ensuring people’s safety and human rights: the essential purpose of all peace missions.

His exchange with Roxanne Bouchard showed Patrick Kègle that “words and art in general can be agents of peace.” He quotes a passage from Why War?, which records a 1931–1932 correspondence between Sigmund Freud and Albert Einstein. Freud writes: “Meanwhile, we may rest on the assurance that whatever makes for cultural development is working also against war.” Patrick Kègle couldn’t agree more.