Borden and King: Shaped by war 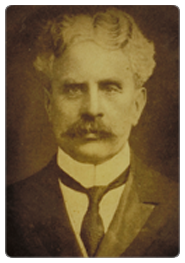 Canada’s wartime prime ministers may well have been forgotten by history if not for the titanic struggles that shaped and defined their years in office, says historian Tim Cook, award-winning author of the new book Warlords: Borden, Mackenzie King, and Canada’s World Wars.

Though both their tenures spanned years beyond history’s greatest conflicts, Sir Robert Borden and William Lyon Mackenzie King were largely uninspired in their accomplishments outside of 1914–18 and 1939–45.

“I think Borden, if there hadn’t been a war, would have been forgotten today,” said Cook, acting director of research, exhibition and interpretation at the Canadian War Museum. The war made Sir Robert Borden. It forged the nation and it transformed him into a war leader.

“King had served longer as prime minister before the war, but he had been largely undistinguished in what he had done. Again, it was war that made Mackenzie King as much as Mackenzie King reshaped Canada.”

Neither man was well-equipped to deal with what confronted them in leading Canada during unlimited war efforts. Both were civilian prime ministers with almost no military training. “They were out of their depth,” said Cook. Yet both rose to the occasion.

Borden embraced the role of war leader, galvanizing a nation of just 8 million people, while King, a generation later, was more cautious, to a degree resisting the imperial ardour of some in what was by then a much-changed country of 11.5 million. Yet he built an impressive air force and navy to support the allies, and he raised an army that served from Hong Kong to Sicily, to Normandy and Holland, and on into Germany.

Borden’s legacies became income tax (initially a temporary measure), women’s voting rights, the Canadian Corps, and “a new sense of Canadian destiny,” as the young dominion stepped out onto the world stage.

With almost one in ten Canadians serving in the military during the Second World War, King skillfully guided the country into a new age in which it solidly established itself as a distinctly North American nation, never to look back.

“In both world wars, Canada’s fighting forces punched above their weight and made a name for Canada,” said Cook. “We emerged as a stronger, wealthier nation, a middle power.”

Warlords: Borden, Mackenzie King, and Canada’s World Wars by Tim Cook was shortlisted for The Charles Taylor Prize 2013. It is published by Allen Lane.