Curtain rises on a community’s heritage 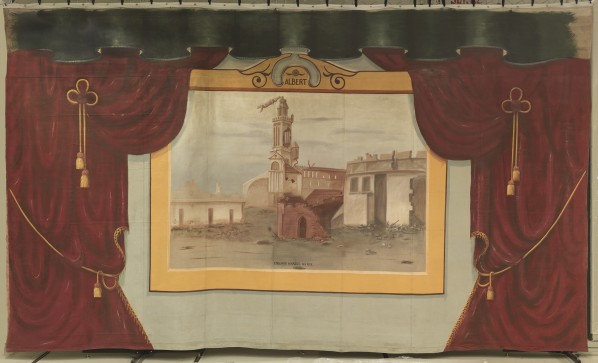 When the Canadian War Museum unveiled the restored Penhold curtain at a special commemorative event on November 5, 2015, it marked the culmination of years of effort to breathe new life into a unique artifact from a town near Red Deer, Alberta.

The massive theatre curtain, measuring 3.7 x 6.3 metres, was created for the Penhold Memorial Hall, a community centre built by the local Women’s Institute to honour those who served in the First World War. Many soldiers from the Penhold District were killed, wounded or went missing during the 1916 Battle of the Somme, which explains the iconic scene painted on the drop curtain.

Albert Basilica and the Golden Virgin

The creators of the curtain, Arthur England and Harold Haste, veterans of the war themselves, depicted the ruins of the Basilica Notre-Dame de Brebières in Albert, France and the Golden Virgin statue that hung precariously from the spire, a sight Allied soldiers passed on their way to the Somme battlefields. Many believed the war would end when the Madonna fell, but although she came down during the German 1918 Spring Offensive, fighting continued for another half year.

The curtain carries additional local historical significance thanks to the numerous names, drawings, jokes and other inscriptions on the reverse side, left behind by the many local and travelling theatrical and musical productions that performed in the Hall over the years.

Restoring a piece of history

After hanging in the Memorial Hall for over 40 years, the curtain was taken down in the 1960s and forgotten until it resurfaced during renovations in 2004. In 2006, the town donated the artifact to the War Museum, where a team led by conservator Anne Macdonnell and artifacts restoration preparator Michael Miller began working to restore the fragile curtain.
­­­­­­­
“The curtain’s size posed a real challenge,” says Macdonnell. “Just to examine it, we had to lay down large sheets of plastic and slowly unroll the curtain so it was face up. Then we placed more plastic on top and curled the curtain back on itself to access the other side. But we couldn’t even photograph it accurately because of the angle.“

Next, the Museum contracted Legris Conservation to perform the delicate restoration work.

“The curtain came to us in pretty rough shape, dirty and stained, partly because the paint was a water-soluble mixture of pigment and animal glue,” says David Legris. “After stabilizing the fabric, we vacuumed both sides, cleaned it with vulcanized rubber sponges and even used scalpels to remove hardened dirt.”

Legris spent four months repairing water and mould damage, mending tears, patching holes and carefully retouching the vibrant colours, while ensure that work on one side wouldn’t be visible on the other. He did leave one hole intact — the original peep-hole at the centre of the curtain, which actors used to watch the audience.

Meanwhile, Miller devised a new hanging system by modifying an aluminum backdrop lift like those used on film sets. A telescoping crank mechanism raises the top of the curtain straight up from the roll, making it easier to see view from every angle.

“This has been such an interesting and challenging project,” Macdonnell says. “Everyone did excellent work.”

The Canadian War Museum thanks Mr. Steward Ford, a Penhold, Alberta business man, for his donation of $60,000 to restore the curtain. The restored Penhold curtain is now on display for a few months at the Penhold Multiplex.