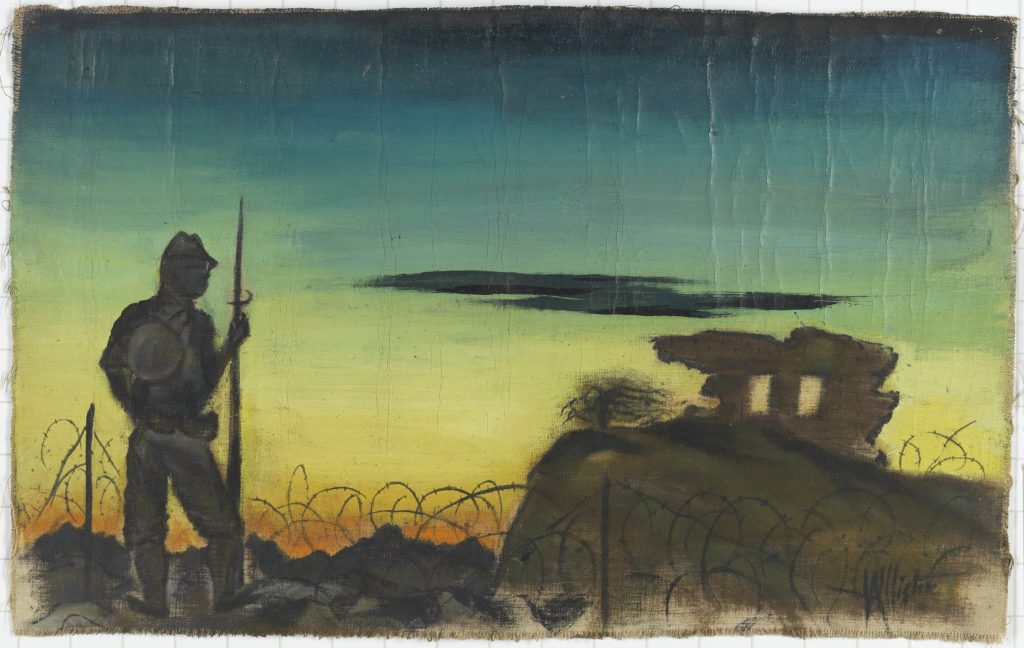 In late 1941, when signalman William Allister heard he was shipping out, he assumed he was bound for Britain. Instead, he was sent to the British colony of Hong Kong. Within weeks, the Japanese attacked, and William was part of the desperate battle.

When the Allied forces were overrun, William was taken prisoner. He — like so many Canadians — was mistreated, abused and terrorized in the prisoner-of-war camps. Artistic by nature, he took refuge in painting, using improvised materials such as crankshaft oil for paint, handmade brushes, and stolen pieces of tent canvas.

Growing up in Montréal during the vibrant 1930s, William showed early promise as an actor, and would continue his acting career long after the end of the war. He was an author and filmmaker, as well as a commercial and fine artist, often expressing his disturbing wartime experiences through his art.

The Canadian War Museum is proud to own several paintings by William Allister that were generously donated by his wife, Mona Allister. William created his depictions of life as a prisoner of war in secret. He hid them from his captors by sewing them into the pant leg of a fellow prisoner. William painted the work featured here in 1942, when he was still a prisoner. It is on display in the exhibition Forever Changed – Stories From the Second World War.

Following the war, William remained haunted by the treatment of prisoners at the hands of the Japanese, often channelling his feelings into his art and writing. In 1983, nearly 40 years after his imprisonment, he decided to return to Japan with his wife. “We lived for two months in Kyoto, Japanese style,” he said, “absorbing the spirit of the land, seeing a deeper understanding, a new direction on the rocky road of forgiveness. [It] brought an inner peace at last.”

His acclaimed East Weds West collection was conceived during that time, and the Canadian War Museum was honoured when Mona Allister presented it with the first work in that series. In addition to writing two books on his wartime experiences, William was the subject of the 1995 Canadian documentary titled The Art of Compassion.

“My father was very open about his time as a prisoner of war,” said his daughter, Dorianne Allister Winkler. “Even as child, I remember he shared many of his wartime experiences with us as a family. Through the 19 mural-size paintings in the East Weds West series, he essentially painted his way to peace. He told us he would never forget, but to forgive — yes!”

William Allister died in British Columbia in 2008 at the age of 89. He left behind an indelible record of his experiences as a prisoner of war, while also demonstrating the power of art as an outlet for understanding the Canadian military experience.