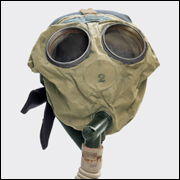 In April 1915, after just six months of training, thousands of Canadian soldiers arrived in Flanders in the northwest of Belgium. Their first engagement was the infamous Second Battle of Ypres. Ypres was the last major Belgian city in Allied hands. On the first day of fighting, April 22, 1915, the Germans released 160 tons of lethal chlorine gas.

This was the first time chlorine gas had been used in the war, and its effect was devastating. Coughing, choking and dying, soldiers ran in desperation from the massive greenish-yellow cloud. As Canadian Major Harold Matthews later wrote: “It is impossible for me to give a real idea of the terror and horror spread among us all by this filthy loathsome pestilence.”

“The Second Battle of Ypres ended the romantic ideas some Canadians had about the war,” says Mélanie Morin-Pelletier, curator of Fighting in Flanders – Gas. Mud. Memory, a newexhibition opening at the Canadian War Museum in November 2014.

Lieutenant Alexis Helmer was one of many Canadian soldiers who died at Ypres. Helmer’s death prompted his friend Lieutenant-Colonel John McCrae, a surgeon, to write his iconic poem In Flanders Fields. The exhibition includes a copy of the poem in McCrae’s handwriting. In Flanders Fields was immediately popular with soldiers and was used in recruiting drives back in Canada.

The exhibition documents the Allied command’s evolving efforts to protect soldiers during gas attacks. Early on, a gauze pad soaked in chemicals and a chemically treated helmet both proved difficult to use. Later, the small box respirator, with a filter and a face mask available in four sizes, was found to offer the most effective and easy-to-use protection.

Gas wasn’t the only challenge facing Canadian troops. Before capturing the strategically important village of Passchendaele in October and November 1917, Canadian soldiers fought through mud deep enough to drown a man.

The exhibition also explores the deep and ongoing connection between Belgians and Allied soldiers. “The First World War is still an integral part of Belgium today,” says Morin-Pelletier. “Belgians continue to commemorate the Allied defence of their land, and the tens of thousands of Canadian and other Allied soldiers who died fighting in their country.”