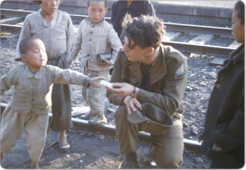 More than 25,000 Canadians served. Of those, 516 died.  Basically a regional power struggle, the Korean War was also the first “flashpoint” in what people were calling the Cold War. Raging for three bloody years, it left a nation in ruins, and at times threatened to unleash a nuclear inferno.

And yet for decades we have scarcely remembered it.

When the forces of Communist North Korea invaded the Republic of Koreain the south on June 25, 1950, the Canadian government supported the idea of an American-led United Nations force to repel the invasion. Canadians were generally apprehensive about the spread of communism and opposed in principle to what was a naked act of aggression. At the same time though, Canada was reluctant to get too deeply involved. Finally pressured to contribute militarily, the Canadian government put out the call for recruits for a special army force bound for Korea. Veterans, and young men who had missed out on the Second World War, flocked to the recruiting stations.

But for most Canadians, Korea was far away, both geographically and psychologically. The Second World War had ended just five short years before, and people didn’t feel the emotional and personal connection with Korea that they had with Europe.  Consequently, far fewer Canadians served in Korea, so it never touched people at home in the same way as the Second World War.

For the most part, Canadians preferred to focus on their booming economy. They may have initially worried about the Korean War, a little, but as the ceasefire negotiations dragged on and the war wound down, they lost what interest they had.

If Canadians forgot, however, South Korea didn’t.  “Many Canadians,” says Dr. Andrew Burtch, the Canadian War Museum’s historian for the post-1945 period, “would be surprised by the depth of gratitude that is expressed there towards veterans of that conflict.” Canada is well regarded as one of many countries that helped save the Republic of Korea from being conquered by one of the world’s harshest totalitarian regimes.

July 27, 2013, marks the 60th anniversary of the end of the Korean War. To help us appreciate the sacrifices Canadians made, the War Museum has upgraded displays in the permanent collection relating to the war, and organized Korea 60, an exhibition of 25 photographs drawn from private collections and archival sources.

Korea 60 looks at the causes of the war, the conditions Canadians faced on the ground there, the armistice and its aftermath, and how the Republic of Korea and Canada have commemorated what has often been called the “forgotten war.” Korea 60 runs until January 5, 2014 in the Lobby of the Canadian War Museum.