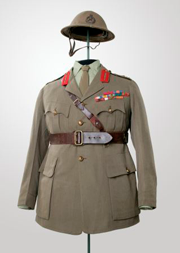 The Valiants are sculptures of 14 heroes from Canada’s military past. Rendered in bronze, they stand adjacent to the National War Memorial. Among them are Laura Secord, General Sir Arthur Currie, Major-General Sir Isaac Brock and Thayendanegea (Joseph Brant). They are life sized and portrayed in extraordinary detail, with every button and braid as historically accurate and true to life as sculptor Marlene Hilton Moore could make them.

“These were actual living people,” she said. “They wore highly detailed uniforms and clothing and I wanted to capture that. It was my desire to make each historical person a living presence in today’s world.”

Hilton Moore achieved that goal through extensive research and innovative techniques. She sculpted the faces and hands from clay, and dressed cast models in clothing and accoutrements, most of which were duplicated by a seamstress or reproduced from high-resolution images that were used as templates for the sculptures. When the results were cast in bronze, even the texture of the materials was preserved.

To ensure the historical accuracy of the clothing and accessories, Hilton Moore reached out to experts such as Eric Fernberg, a specialist in military dress and insignia at the Canadian War Museum. He gave her access to vital source materials, such as the actual jacket worn by Major-General Brock when he was fatally shot at the Battle of Queenston Heights.

“You could see the hole made by the bullet that killed him,” said Hilton Moore. “It was so palpable. You couldn’t replace that kind of experience, that connection with the past.”

Fernberg also showed her the actual Sam Browne belt worn by the portly General Currie. “I could see the embossment where he belted it in,” she recalled. “It was amazing. I just took a tape measure and measured his actual girth from the belt. Things like that were quite phenomenal.”

“We showed her items of clothing from our reserve collection,” said Moses, “including a particular kind of Iroquois centre-seam moccasin that some portraits of Brant depict him as wearing.” Using his contacts, Moses, now Policy Analyst, Aboriginal Affairs Directorate at Canadian Heritage, also put the sculptor in touch with a moccasin maker who was able to reproduce the footwear.

Hilton Moore said it was a marvellous experience to work with experts at both Museums. “It was their interest and enthusiasm that I found so meaningful,” she said.

Fernberg and Moses were delighted to help. “We see ourselves as being a resource for Canadians, a centre of excellence for this sort of historical information and material culture,” said Fernberg, who has also consulted on the historical accuracy of coin designs and similar projects. Moses fondly recalls working with a painter and a writer, both of whom sought access to the collections in search of information and inspiration.

Helping in the creation of art works is certainly not a big part of the job both men said, but it does help the Museums fulfill their central mandate: to enhance public knowledge and understanding of Canada’s history and heritage.