One powerful artifact: The tombstone of the Unknown Soldier 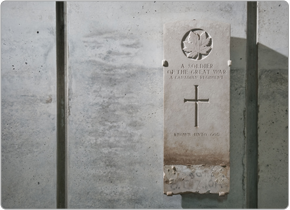 “‘Powerful’: that’s the word I hear most often.” Mélanie Morin-Pelletier is standing in the Memorial Hall of the Canadian War Museum, describing the reaction of visitors to the hall’s single artifact: the tombstone of the Unknown Soldier. The power it evokes will be greatly magnified on November 11 at precisely 11 a.m., when sunlight from the hall’s lone window perfectly illuminates this symbol of Canada’s war dead. As in previous years, the moment will be broadcast live on the Internet.

“‘Touching’ is another word I hear quite a bit from visitors,” says Dr. Morin-Pelletier, a historian at the Museum. The hall is a quiet, sombre place, she adds, “a place to pause and remember and to think about the sacrifices made by Canada’s fallen in all wars.”

The gravestone is among the Museum’s most iconic artifacts. At the request of Parliament in 2000, it was brought to Canada from a First World War cemetery in France. The Memorial Hall of the new War Museum, which opened in 2005, was designed specifically to house the tombstone and to ensure its remarkable and symbolic illumination each year on the anniversary of the date and time in 1918 that the First World War officially ended.

Also repatriated with the gravestone were the remains buried in its shadow. Only two things are known about the soldier’s identity: he was a Canadian and he died at or near Vimy Ridge, site of one of the most storied battles in Canadian military history. The remains are now entombed at the National War Memorial in Ottawa. Like the gravestone, they are a focal point for national commemoration, especially on Remembrance Day.

The Unknown Soldier was one of 66,000 Canadians killed on European battlefields during the First World War. Dr. Morin-Pelletier says that as many as 20,000 are commemorated on memorials, while others are buried under unmarked tombstones.

You can watch the dramatic illumination of the tombstone in the Memorial Hall on November 11 at 11 a.m. on the Canadian War Museum’s website.