Peace – The Exhibition at the War Museum 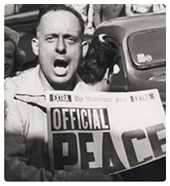 A broken clock retrieved by a 13-year old girl from the post-blast rubble of her home in Hiroshima. A blue beret worn by a member of the first United Nations Peacekeeping mission. A Victoria Cross won by a First World War stretcher-bearer. What do these artifacts have in common?

They’re all part of a ground-breaking exhibition, coming soon to the Canadian War Museum, which explores the diverse ways that Canadians have worked for peace at home and around the world. Through more than three hundred evocative artifacts, the majority from the collections of the War Museum and the Canadian Museum of Civilization, Peace – The Exhibition tells the story of how generations of Canadians have negotiated, organized and intervened for peace.

“Everyone will encounter something that surprises them and broadens their perspective,” says Kathryn Lyons, Senior Interpretive Planner at the War Museum. “They’ll learn how Canadians could make very different choices about what pursuing peace means in a given context. For example, they’ll experience the stories of Canadians who demonstrated against the Vietnam War and Canadians who joined the United States to fight in it.”

By focusing on 12 pivotal events from ancient times to today, the exhibition vividly illustrates that working for peace has been a shaping force in Canada’s history. Visitors will experience the stories of Canadians as activists, combatants, diplomats, humanitarians and peacekeepers. They’ll learn about defining events and the intimate, personal stories of individuals and families caught up in those events. “The personal stories of Canadians acting for peace, and the artifacts that evoke those stories, are the jewels of the exhibition,” says curator Amber Lloydlangston, Assistant Historian at the War Museum.

But let’s return to the opening of this story. Setsuko Thurlow, the 13-year old girl who retrieved the clock, emigrated from Hiroshima to Canada, where she was eventually awarded the Order of Canada for her lifetime of activism against nuclear weapons. Chief Warrant Officer H.F. Stevens from Calgary, Alberta, wore the iconic blue beret as a member of United Nations Emergency Force 1, the first UN Peacekeeping mission. Stretcher-bearer Private John Francis Young received his Victoria Cross, the highest military honour for British and Commonwealth forces, for fearlessly assisting wounded men during intense fighting near Dury in France on September 2, 1918.