The soldier’s life in the First World War 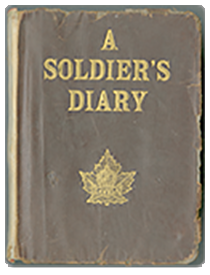 Canadians will experience a remarkable range of exhibitions and programs during the War Museum’s commemoration of the First World War Centennial. One of the most personal and intimate of these is a multi-phase digitization project that will result in providing online access to soldiers’ diaries and photo albums, postcards, slides and much more.

The second phase of the project will include the scanning of 340 panoramic photographs of Canadian battalions, as well as views of training camps such as Valcartier. Measuring up to 2 metres in length, these photographs are a visual testament to the number of Canadians who enlisted in the Canadian Expeditionary Force. “When I look at all of those brave young faces, I can’t help but wonder how many of them returned home,” says Maggie Arbour-Doucette, Collections Specialist for the photo archives.

In addition, a selection of documents and photographs relating to significant or interesting military individuals from the archives’ collections will be scanned, and the three-dimensional models or contour maps of Vimy Ridge will be photographed. The models, some completed one week before the battle, were used as a tool to plan the assault on the ridge.

The third and final phase of the project will see the collections of First World War sheet music, sound recordings, silk embroidered postcards, autograph albums, Rolls of Honour and trench newspapers scanned and linked to the online catalogue. The trench newspapers — 200 issues from 35 different news-sheets and magazines — were often published very close to the front line. They were intended to provide information and boost troops’ morale, and typically contained jokes, amusing anecdotes, cartoons and occasionally poetry. Few of these newspapers survived the harsh conditions of the trenches but fortunately some were saved by the soldiers or sent home to loved ones.

One particular example held in the Museum’s library is titled the Dead Horse Corner Gazette, described as “a monthly journal of breezy comment,” and produced for the 4th Battalion, 1st Canadian Contingent.

By the end of the program, the public, researchers, teachers and students will have access to well over 15,000 images online. As Carol Reid, Collections Specialist for the document archives remarks, “All of these archival documents are so important because they help you see the war through the eyes of the young men and women who experienced it. You get a real sense of how they felt, what they saw, and how they passed their time, and you ask yourself could I do what they did?”

Images from Phase 1 can be viewed in the Military History Research Centre’s database, and will eventually be linked to the museum’s existing online exhibit, Canada and the First World War.