Canadians recognize Remembrance Day, originally called Armistice Day, every 11 November at 11 a.m. It marks the end of hostilities during the First World War and an opportunity to recall all those who have served in the nation’s defence.

Armistice Day was inaugurated in 1919 throughout much of the British Empire, but on the second Monday in November. In 1921, the Canadian Parliament passed an Armistice Day bill to observe ceremonies on the first Monday in the week of 11 November, but this combined the event with the Thanksgiving Day holiday. For much of the 1920s, Canadians observed the date with little public demonstration. Veterans and their families gathered in churches and around local memorials, but observances involved few other Canadians.

In 1928, some prominent citizens, many of them veterans, pushed for greater recognition and to separate the remembrance of wartime sacrifice from the Thanksgiving holiday. In 1931, the federal government decreed that the newly named Remembrance Day would be observed on 11 November and moved Thanksgiving Day to a different date. Remembrance Day would emphasize the memory of fallen soldiers instead of the political and military events leading to victory in the First World War.

Remembrance Day rejuvenated interest in recalling the war and military sacrifice, attracting thousands to ceremonies in cities large and small across the country. It remained a day to honour the fallen, but traditional services also witnessed occasional calls to remember the horror of war and to embrace peace. Remembrance Day ceremonies were usually held at community cenotaphs and war memorials, or sometimes at schools or in other public places. Two minutes of silence, the playing of the Last Post, the recitation of In Flanders Fields, and the wearing of poppies quickly became associated with the ceremony.

Remembrance Day has since gone through periods of intense observation and periodic decline. The 50th anniversary of the end of the Second World War in 1995 marked a noticeable upsurge of public interest, which has not ebbed in recent years. It is now a national holiday for federal and many provincial government workers, and the largest ceremonies are attended in major cities by tens of thousands. The ceremony at the National War Memorial in Ottawa is nationally televised, while most media outlets – including newspapers, magazines, radio and television stations, and internet sources – run special features, interviews, or investigative reports on military history or remembrance-related themes. 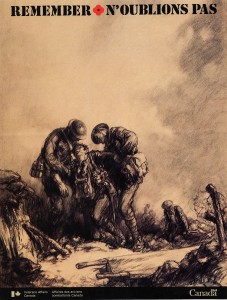 Produced by the Department of Veterans Affairs for Remembrance Day 1983, this poster is based on H.J. Mowat's painting Stretcher Bearers. Veterans' organizations and several government departments normally produce different commemorative images each year, sometimes in memory of particular events or anniversaries. 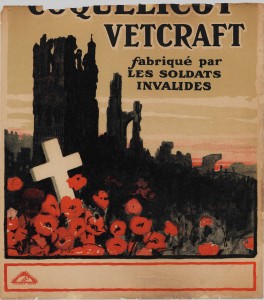