The Sculptures on the Vimy Memorial

HISTORY AS MONUMENT: The Sculptures on the Vimy Memorial 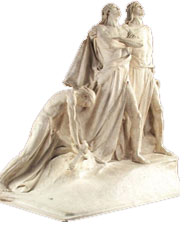 France. They are now the only legacy of Canada’s most important memorial commission in which the artist’s own hand is clearly present. The stone memorial and figures in France are the work of professional stonecarvers working from his designs.

Nations have always commemorated their achievements and sacrifices in battle with monuments. These have usually been the work of their best artists and sculptors. Canada has been no exception. The nation’s Great War memorial at Vimy Ridge [Maps] was also Allward’s culminating achievement. Situated on top of the ridge, overlooking the Douai Plain in northeastern France, and easily viewed today from the highway that passes below, the memorial is a magnificent testimonial to the Canadian sacrifice during the Great War.

Canadian losses during the First World War (1914-1918) were staggering: 60,000 soldiers dead from a total enrollment of 625,000. On the western front, one Canadian in seven who served was killed. Of those, 16,000 have no known grave. The Imperial War Graves Commission (IWGC), established in May 1917, to properly bury the dead and establish permanent cemeteries, tried to determine how to memorialize the dead and missing. The 1918 Imperial Conference in London, England approved five general principles. The two relating to memorials stipulated that they should be both public and permanent.

At the end of the war, an IWGC committee awarded Canada eight battle sites – three in France and five in Belgium – on which to construct memorials. In 1920, the newly established Canadian Battlefields Memorial Commission organized a competition for a Canadian memorial to be erected on each site. In October 1921, the commission announced the winner: Walter Allward, whose design included twenty symbolic figures associated with war. These figures formed an integral part of a massive stone platform surmounted by two soaring pylons representing Canada and France.

Allward stated in a 1921 interview that his idea for the memorial was inspired by a wartime dream that he had never forgotten: “When things were at 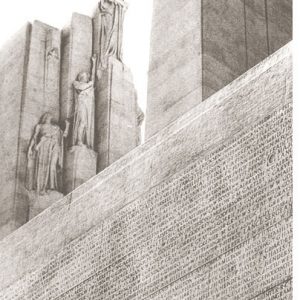 their blackest in France, I went to sleep one night after dwelling on all the muck and misery over there, my spirit was like a thing tormented…I dreamed I was in a great battlefield. I saw our men going in by the thousands and being mowed down by the sickles of death…Suffering beyond endurance at the sight, I turned my eyes and found myself looking down on an avenue of poplars. Suddenly through the avenue I saw thousands marching to the aid of our armies. They were the dead. They rose in masses, filed silently by and entered the fight to aid the living. So vivid was this impression, that when I awoke it stayed with me for months. Without the dead we were helpless. So I have tried to show this in this monument to Canada’s fallen, what we owed them and we will forever owe them.”

Allward was an experienced sculptor and a well-known designer of memorials at the time he won the competition. Born in Toronto in 1875, he trained as a draughtsman. In the period 1891-93, he attended sculpture classes at Toronto’s New Technical School and, in 1894, rented his first studio. For the next two years he worked on the figure of ‘peace’ for the Toronto monument honouring the 1885 Northwest Rebellion, the insurrection led by Louis Riel in what is now Saskatchewan. In 1910, he completed another Toronto memorial, this one commemorating Canada’s participation in the South African, or Boer War, of 1899-1902. These commissions secured his reputation and ensured Allward was fully employed as a sculptor. He mainly created portrait busts and statues of famous Canadians such as the one of Sir Wilfrid Laurier created in 1901 and memorials, such as that honouring Alexander Graham Bell, unveiled in Brantford, Ontario in 1917.

In the summer of 1922, the Canadian Battlefields Memorial Commission selected Vimy Ridge as the only site for Allward’s winning memorial. The other battle sites, with the exception of that at St. Julien, which received the competition’s second-place design, made do with less distinguished monuments. Certainly Vimy Ridge’s impressive location and vantage point, as much as the battle’s military significance, contributed to its selection. Allward almost immediately began to sculpt the figurative elements in clay in a newly acquired studio in London, England. Meanwhile, clearing the100-hectare site of the dangerous detritus of war – unexploded bombs, artillery shells, and grenades – took two and one half years. It also took two years to find stone that Allward considered suitable for the memorial. The source, ironically, was a quarry near Sarajevo, Yugoslavia where, in 1914, the assassination of Austrian Archduke Franz Ferdinand and his wife had precipitated the outbreak of the First World War.

Because unfired clay quickly dries out and cracks, Allward made plaster moulds from the original clay figures very soon after their creation. The far sturdier plaster statues that the Canadian War Museum now holds were then cast from these moulds and shipped to the Vimy site. The recent restoration of three of the main figure groups, however, has shown that the sculptor worked these plaster casts afterwards. He applied additional plaster in some cases, or carved the original casting in more detail. 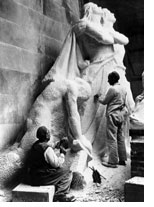 The Christian symbolism of a number of Allward’s twenty figures is obvious. For many Canadians, the First World War had been coloured by a belief that the horrifying number of deaths on the battlefield could be equated with Christ’s death on the Cross and be seen as having redemptive value. The figure of ‘Canada mourning her fallen sons’ makes a clear reference to traditional images of the Mater Dolorosa (the Virgin Mary in mourning), while the figure spread-eagled on the altar below the two pylons resembles a Crucifixion scene. The figures at the tops of the pylons represent the universal virtues of faith, justice, peace, honour, charity, truth, knowledge and hope. The traditional link between art and memorial is inferred in the reclining figures of the two mourners, patterned on the four statues by Michelangelo on the Medici Tomb in Florence, Italy. Between the pylons stands a figure holding a burning torch. Entitled ‘The Spirit of Sacrifice’, it is a reference to one of the most famous poems of the Great War, ‘In Flanders Fields,’ by the Canadian Army Medical Corps officer, Lieutenant-Colonel John McCrae.

The memorial took ten years to complete. It was finally unveiled on 26 July 1936 before a crowd of more than 100,000 spectators. Canada’s Minister of Justice, Ernest Lapointe, expressed the sentiments of those present, and reinforced the messages of Allward’s monument, when he said: “The grandest tribute we could offer to Canadian soldiers is to affirm that their sacrifices have contributed to the introduction into our civilization of its highest modern conception – that of universal Peace founded on recognition of the basic right of people to life and justice.”

In 1937, the plaster figures were packed in crates and shipped to Canada. In a letter written in March 1937 to J. B. Hunter, the deputy minister of Public Works, Prime Minister William Lyon Mackenzie King seemed to support the idea that bronze statues might be cast from them and placed at suitable sites in Ottawa and the provinces. This never happened, however, and the plaster figures disappeared into Department of Public Works storage. In 1960, the statues were housed in a warehouse that also contained a portion of the collection of the Canadian War Museum, which requested that they be moved elsewhere in order to accommodate an impending large shipment of artifacts.

On 3 May 1960, the Department of Veterans Affairs, which had custody of the models, informed the museum that “…the Minister of Veterans Affairs had agreed that the models may be destroyed” so long as photographs were taken of them first. At the time, this seemed to be an acceptable action because the sculptures were regarded as working models rather than as original works of art. The proposal was “that the Army authorities could assist by accepting delivery of the crates, at the Proving Grounds or some other location where the attention of the public would not be attracted, and where the models could be photographed and then destroyed.” However, the Minister of National Defence did not agree to the plan. Instead, in September 1960, the sculptures were shipped to Vimy Barracks at Barriefield, Ontario for storage.

Seventeen years later, in 1977, seventeen of the plaster figures had returned to Public Works storage in Ottawa. (The remaining three remained in Barriefield and are now on display in the new Military Communications and Electronics Museum attached to Canadian Forces Base Kingston.) That year, a small museum in Elgin, Ontario that specialized in Canadian sculpture requested permission from the Department of Veterans Affairs to acquire and display the Allward sculptures. This request revived interest in the works. However, lacking proper facilities for storage and display, the Elgin gallery was unable either to acquire or display them. Instead, the Department of Veterans Affairs transferred them to the Canadian War Museum. In 1993, museum staff opened the crates for the first time since 1937, in preparation for an exhibition on the work of Walter Allward. Although this exhibition never materialized, the figures were not re-crated. Instead, in 1999, the delicate, time-consuming and expensive process of restoration began in association with the exhibit Canvas of War that opened in February 2000.

Sixty-four years after the completion of the Vimy Memorial, Walter Allward’s 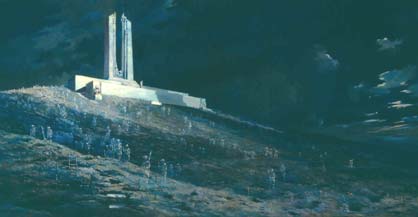 greatest works have become a newly vibrant part of our national heritage. Many Canadians have had the opportunity of travelling to France to visit the Vimy Memorial; now tens of thousands more can see the inspiration for this historic monument in the sculptor’s original plaster figures.