Max Aitken had made millions of dollars in Canada at the turn of the century through the purchase, amalgamation, and sale of companies. A shrewd entrepreneur with powerful enemies, he left Canada in 1910 for Great Britain where he was soon knighted, elected as a member of parliament, and began to purchase newspapers. He was raised to the peerage at the end of 1915 and took as his title Lord Beaverbrook.

Beaverbrook was a powerful force among Conservatives in Great Britain, but when war broke out in August 1914 he was not invited to join the War Cabinet. Looking for a role, he turned to Canada, calling upon his friend Sam Hughes, the minister of militia and defence. Hughes made Beaverbrook his ‘Eye Witness’ overseas, with a mandate to report home on wartime information. Beaverbrook expanded his role to be an historian and publicist for the Canadian forces. He wrote praiseworthy newspaper accounts about the Canadians in battle, highlighting their distinctiveness in relation to British soldiers. These were followed by contemporary histories, a semi-official newspaper, and a series of additional commemorative publications.

In early 1916, Beaverbrook established the Canadian War Records Office using his own funds. The CWRO publicized Canadians’ role and gathered and created records to document the war.

Despite his influence, Beaverbrook had trouble convincing the War Office of the value of documenting the war. The War Office feared the revelation of military secrets to the enemy and a loss of control over information coming from the front. While Beaverbrook was prevented in early 1916 from moving photographers, filmmakers, and war artists to the front, he refused to compromise, eventually enlisting the aid of Canadian and British politicians. By the summer of 1916, he had succeeded.

While some soldiers had brought small, hand-held cameras into the trenches at the start of the war, in March 1915 an order from the British high command forbade personal cameras in the trenches for fear of turning over valuable information to the enemy. Its enforcement meant that only a few illegal photographs depicted the front from the start of the war until the official photographers arrived in the summer of 1916. After this, official photographers recorded the Canadians in the line and behind. Cinematographers joined them on the battlefield in time to capture the Canadians on the Somme. The photographs and film footage was stunningly good, although it was always difficult to capture the soldiers in combat as smoke, dust, explosions, poor lighting, bulky equipment, and enemy fire were not conducive to clear photographs or film. But the photographers and cinematographers continued to try eventually snapping 7,900 photographs and shooting thousands of feet of reel.

Beaverbrook also established the Canadian War Memorials Fund in 1916 to commission official war artists to paint the Canadian war effort. The official war art program would eventually employ close to 120 artists, most of them British or Canadian, who created nearly 1,000 works of art. A number of painters were Canadian, including future members of the Group of Seven A.Y. Jackson, Frederick Varley, and Arthur Lismer. While most of the works depicted the fighting forces and geography overseas, important artists like Mable May and Manly MacDonald painted women in factories and fields in Canada.

Beaverbrook’s programs left a poignant visual legacy of the war as his photographs, films, and war art were returned to Ottawa. Copies of the photographs were available for purchase until the mid-1920s, before being transferred to the Public Archives of Canada, now Library and Archives Canada. The film collection was lost for many years and not found until the 1930s, when it was used to create an official war film, Lest We Forget (1935). It was later transferred to the National Film Board and the Public Archives of Canada, but much of it was destroyed in a fire in the 1960s.

The war art had a similarly tumultuous fate. Beaverbrook had hoped that it would be housed in a new national war museum, but successive governments refused to commit funds. The art languished in the basements and vaults of the National Art Gallery, rarely seen by Canadians. In the early 1970s, most of the art was transferred to the Canadian War Museum, which had been reopened in 1942. In recent years, hundreds of pieces have been restored or displayed in permanent and travelling exhibitions, or loaned to institutions across Canada. 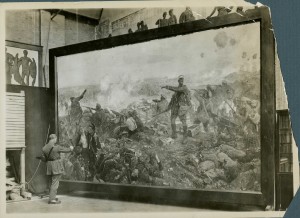 The Creation of War Art

A posed photo of official artist Richard Jack at work on his iconic painting, The Second Battle of Ypres, the first work of art commissioned by Lord Beaverbrook. The official war art program employed close to 120 artists, most of them British or Canadian, who eventually created nearly 1,000 works. This work is on permanent display at the Canadian War Museum. 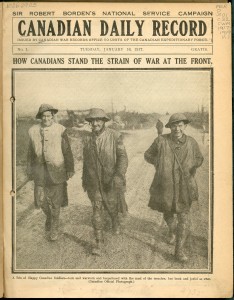 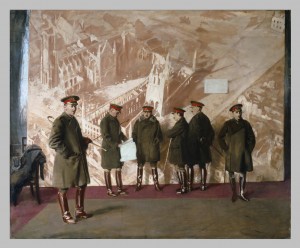 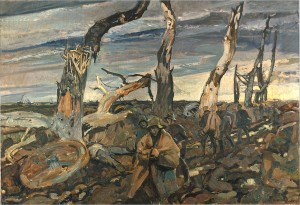 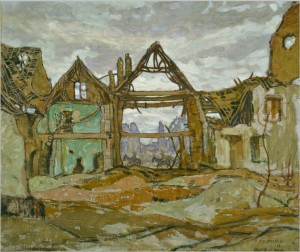 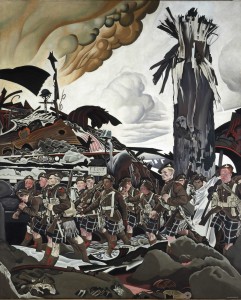 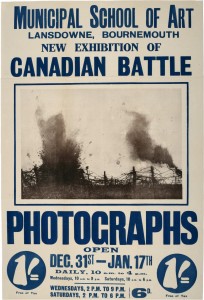 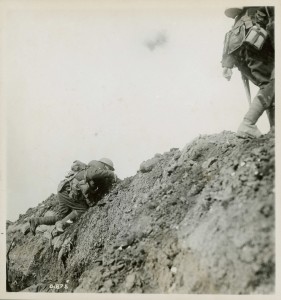 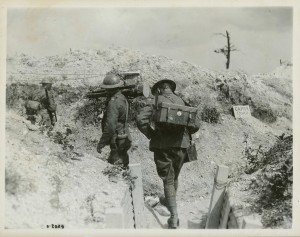 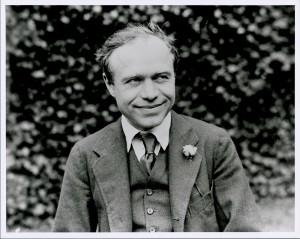 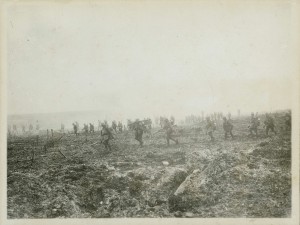