The Halifax Explosion was the largest man-made explosion to occur before the dropping of the atomic bombs during the Second World War.

On 6 December 1917, the Mont Blanc, a French vessel loaded with 2.9 kilotons of explosives, collided with the Belgian relief ship, Imo, in Halifax harbour. A fire broke out on the Mont Blanc which local firefighters tried unsuccessfully to extinguish. When the flames reached the Mont Blanc‘s volatile cargo, the resulting explosion devastated a large part of the city. The Richmond district in the city’s north end and the Dartmouth region across the harbour were all but wiped out.

Military and naval personnel worked with civilians in the relief effort. Nearby cities like Truro took in the homeless. Eaton stores donated furniture. The Canadian and British governments donated millions for reconstruction, while the United States organized a relief train filled with supplies, doctors, and nurses, some of whom were on the scene and working before shocked Canadian officials had fully recovered. More than 90 years later, the province of Nova Scotia each year still sends a Christmas tree to the city of Boston, Massachusetts as a token of friendship for the aid Bostonians rendered in December 1917.

In the aftermath of the explosion, Halifax residents buried their dead, cared for the wounded, and began to rebuild their city. Despite the absolute destruction and the magnitude of relief operations, transatlantic naval convoys had resumed within a week. 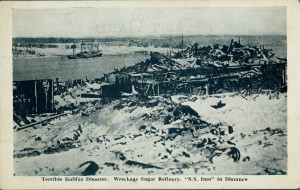 Scene of devastation in Halifax after the explosion of the Mont Blanc. The Imo, which collided with the Mont Blanc, can be seen in the distance. It survived the explosion relatively intact. Much of the city did not. Halifax became known informally as the "Shattered City." 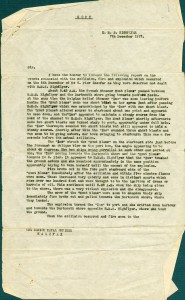