The unique experience of front line soldiers helped to create an exclusive dialect or slang. They used this to speak, sing, or communicate to one another and, sometimes, to differentiate themselves from those who had not undergone the trench experience.

Slang served a variety of purposes. It expressed contempt for one’s superiors or civilians; indicated membership in a particular group; and negated the horrors of the war by trivializing the terrifying.

For example, applying innocuous language helped to trivialize the ferocity of the weapons and the death they brought. German grenades became “potato mashers” and some smaller-calibre shells were “whiz bangs.” 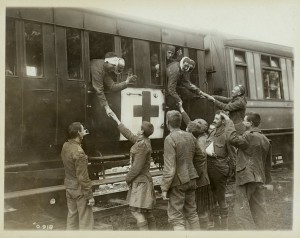 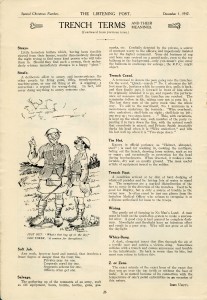