The transition from military to civilian life was often difficult for men and women who had been away for years. Soldiers lobbied for greater financial benefits and forms of recognition while adjusting to civilian lives. Governments sought to remain financially responsible while still treating veterans appropriately. Post-war social and economic unrest affected the prospects for both.

Wartime propaganda had promised veterans a “land fit for heroes,” but the fragile Canadian economy had difficulty supporting hundreds of thousands of demobilized soldiers. Some veterans returned to pre-war jobs, which had often been held for them by patriotic employers, but others struggled as industries geared to military production reduced their workforces or closed altogether. The federal Department of Soldiers’ Civil Re-establishment, founded in 1918, provided vocational training as well as medical treatment, but an economic downturn in 1919-1920 left many veterans out of work, along with 200,000 other Canadians.

Canada developed a progressive, if complicated, pension and benefits scheme, but not all veterans were equally eligible. Those suffering from poison gas, chronic illness, or mental trauma, for example, often had difficulty convincing pension adjudicators that their symptoms were war-related, the prerequisite for a successful claim. Soldiers without arms, legs, or eyes were difficult to refute, but those with disease, debilitating illness, or psychological ailments encountered greater skepticism and more frequent rejection.

Many veterans believed that government should do more. Some joined labour actions that swept the country in 1919, including the violent Winnipeg General Strike. Thousands united in organizations such as the Great War Veterans Association to exercise greater influence in Canadian society. One of their primary demands was a $2,000 bonus for each veteran as compensation for lost income during years of wartime service. While the bonus issue rallied many veterans’ organizations, a succession of governments rejected the proposal as unaffordable in a debt-ridden country.

Veterans and their supporters helped strengthen the nature and extent of Ottawa’s post-war benefits regime but, for most returning soldiers, political advocacy was a relatively minor aspect of the repatriation period. They reconnected with loved ones and rebuilt civilian lives, often relying on new federal programs in order to do so. 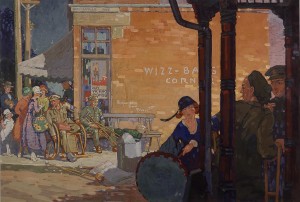 This painting depicts veterans as objects of public interest and curiosity after their return to Canada. The setting is the intersection of Davisville Avenue and Yonge Street in Toronto, outside the Orthopaedic Military Hospital, which had 180 beds and an artificial limb factory. The graffiti "Wizz-Bang Corner," derived from the name for small caliber enemy shells during the war, may indicate a common gathering spot for veterans to meet, rest, or beg. "Fragments From France," in small lettering above the bench, refers to a publication by famous British cartoonist Bruce Bairnsfather. It also betrays a dark sense of humour, as the veterans pictured here include permanently wounded soldiers, one of them an amputee. 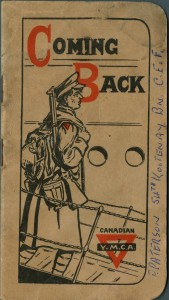 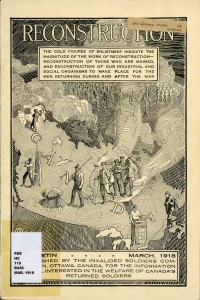 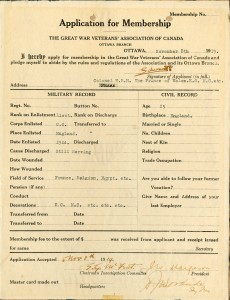 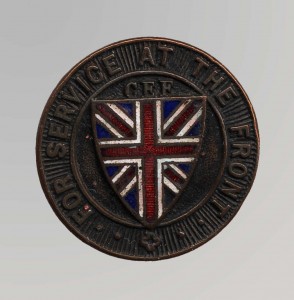 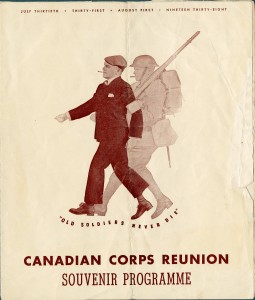 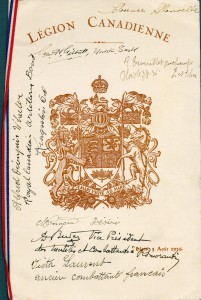 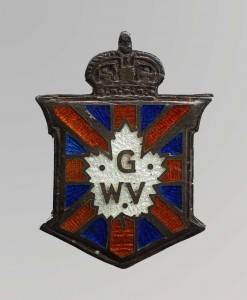 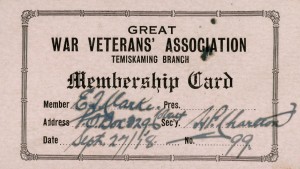 The Prime Minister to Employers 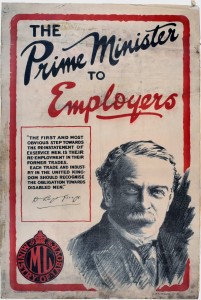 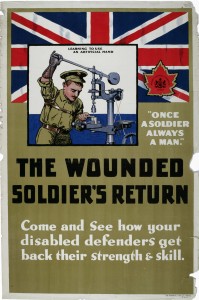