Shellshock was the blanket term applied by contemporaries to those soldiers who broke down under the strain of war.

The pace and intensity of industrialized warfare had profound effects on the human mind and body that were not related to wounds or physical injury. Poorly understood at the time and for many years afterwards, the crying, fear, paralysis, or insanity of soldiers exposed to the stress and horror of the trenches was often held by medical professionals to be the result of physical damage to the brain by the shock of exploding shells. Military authorities often saw its symptoms as expressions of cowardice or lack of moral character. Its true cause, prolonged exposure to the stress of combat, would not be fully understood or effectively treated during the war.

Doctors diagnosed almost 10,000 Canadians with shellshock during the war. Medical treatment ranged from the gentle to the cruel. Freudian techniques of talk and physical therapy helped many victims, while more extreme methods involved electric shock therapy. During the latter, patients were electrocuted in the hope of stimulating paralyzed nerves, vocal chords, or limbs. Shock therapy was more effective than Freudian techniques in returning soldiers to the front, with about two-thirds of all patients returned to the front. It is unknown how many relapsed when they re-entered combat.

Doctors knew very little of what we now term Post Traumatic Stress Disorder, and there were few treatment programs after the war for returned veterans who suffered from the mental trauma caused by war. 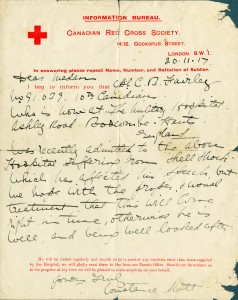 This letter from the Canadian Red Cross Society states that Corporal Charles Benjamin Fairley was admitted to hospital with shellshock. It is noted that the condition has affected Fairley's speech, but it is hoped that he will make a full recovery. Originally from Guelph, Ontario, Fairley enlisted for service in October 1915 with the 29th Battery, Canadian Field Artillery. Approximately 10,000 Canadians were diagnosed with shellshock during the war. Full Text [PDF 17k]