When Britain was at war, Canada was also at war automatically. But Canadians would determine the extent of their own commitment.

Great Britain, which had long pledged to defend Belgium’s sovereignty, issued an ultimatum to Germany on 4 August 1914 demanding the withdrawal of German troops. When the ultimatum expired at midnight, without a German retreat, Great Britain and Germany were at war. So too was the British Empire, including Canada and the independent colony of Newfoundland.

In 1914, Canada was a self-governing dominion of the British Empire, but it did not control its own foreign affairs. As during the South African War (1899-1902), the Canadian government would decide the nature and extent of Canada’s war effort, but legally the country was at war the instant Britain declared one. In 1914, most, but by no means all, Canadians would have agreed with the 1910 statement of Prime Minister Sir Wilfrid Laurier that “when Britain is at war, Canada is at war. There is no distinction.” They nevertheless debated vigorously the size and nature of Canada’s war effort and, increasingly, its relationship with Britain.

By war’s end, some 619,000 Canadians had enlisted in the Canadian Expeditionary Force for service overseas. This was an enormous contribution from a population of just under 8 million in 1914. Approximately seven percent of the total population of Canada was in uniform at some point during the war, and hundreds of thousands of additional Canadians worked on the home front in support of the war. 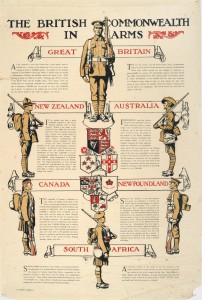 The British Commonwealth in Arms

This poster depicts New Zealand, Australia, Canada, Newfoundland, and South Africa supporting Britain in arms. These British Dominions would eventually contribute more than 1.4 million service personnel to the British war effort from 1914 to 1918.

The World’s Verdict on Germany 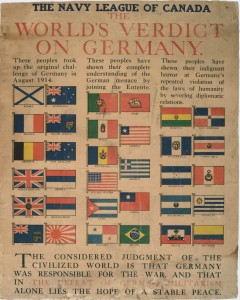