03 Life at the Front Military Structure

The Canadian Expeditionary Force (CEF) was the entire overseas force fielded by Canada during the First World War. Of the 630,000 Canadians who enlisted for military service, 424,000 went overseas as part of the CEF.

The Canadian Corps that fought on the Western Front was the CEF’s largest formation and its principal combat element, but not its only one. Other units in the CEF served outside the Corps, including the Canadian Cavalry Brigade, forestry and railway units, and various medical hospitals.

Canada’s first fighting division in Europe, comprised mainly of troops from the First Contingent who had sailed in fall 1914, served as an individual division under British command.

The growing size and complexity of Canadian forces overseas led in September 1915 to the creation of the Canadian Corps, an operational and administrative grouping of most Canadian fighting units and their supporting services.

From June 1917, the Canadians were led by Lieutenant-General Sir Arthur Currie, a Canadian militia officer who rose during the war from command of a brigade to command of the entire Corps. Currie, who remained in command until 1919, is widely considered one of the war’s most capable generals.

The soldiers of the four divisions and their supporting troops learned to work together and could pool resources to improve combat effectiveness. This cohesion and stability, jealously guarded by most senior Canadian military and political figures, bred a sense of identity and pride in national accomplishment among both soldiers and civilians. 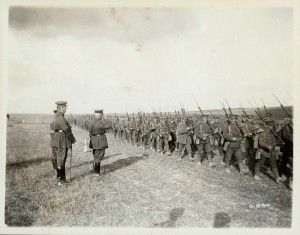 Canadian Corps, Summer 1916 The 1st Canadian Infantry Brigade marches past Minister of Militia and Defence Sam Hughes and Major-General Arthur Currie in the summer of 1916. The Canadian Corps would eventually grow to 12 infantry brigades in its four divisions. The infantry formed the primary strike force within the Canadian Corps, supported by machine-guns, artillery, mortar, engineers, medical units, and logistical formations.