The war pulled Canada from a two-year economic depression by boosting economic activity and reducing unemployment. It also strained the country’s fragile, resource-based economy and its mostly unregulated industries. Wage and price inflation, scarcity, profiteering, and labour shortages led to growing efforts by government to manage resources in support of the war.

Government at first appealed to voluntary efforts. It asked the public to reduce the consumption of scarce commodities, including fuel, to produce more food, and not to hoard essential items. In most cases, it avoided trying to set prices or regulate commercial activity.

Rising prices for Canadian commodities such as wheat were good for farmers and exporters, but inflation eroded the purchasing power of many families. In busy, fast-growing cities energized by war employment, prices rose faster than wages, leading to labour unrest and strikes. Inflation posed special hardships for people on fixed incomes or those who did not benefit from the competition for skilled workers. Women living at home on the fixed salaries of soldier-husbands overseas often faced difficult social choices: a lower living standard; or entry into the growing paid labour force and daycare for their children.

In the summer of 1917, Ottawa resorted to more direct efforts, appointing food and fuel controllers to encourage production, avoid waste, and manage shortages.

These measures represented more government coordination and control than Canadians had ever experienced. Many of them proved temporary, ending in either 1918 or 1919, but in some areas, such as taxation, social welfare, and the responsibility for veterans, the state assumed powers it would never again relinquish. 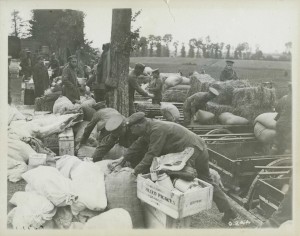 Several Canadian soldiers of the 1st Divisional Train sort rations, including crates of mixed pickles and bacon, and load them into wagons. Several of the waiting wagons are also loaded with bales of hay and large sacks. The Divisional Train was a logistical arm that brought supplies from corps depots to brigades closer to the front. 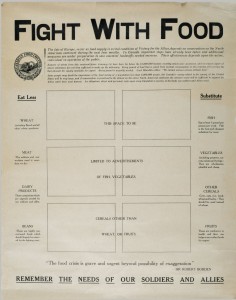 If You Can’t Join Him, You Should Help... 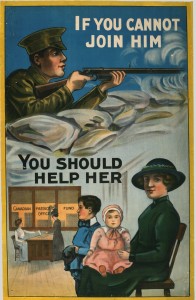