An Enduring Love – A sacrifice that deserves to be honoured

Like many of our donors, John Hodges supports the Canadian War Museum because, for him, it’s personal. He gives because both of his parents served and he wants to honour their wartime experiences. 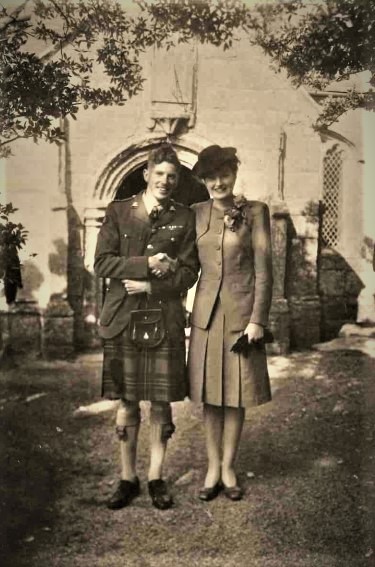 John describes his mother Edith as “a great beauty who was very prim and proper, from England.” Given the choice to work in a factory or aboard ship during the Second World War, she chose The Women’s Royal Canadian Naval Service, serving as a corporal.

John’s father, Alfred, also served in the Second World War, fighting at the Battle of the Falaise Gap, and in Belgium. He later became an honorary colonel and commanded a regiment.

As John explains, his mom and dad met in England in 1945, married just after the war ended, then moved to Canada. “She had a lot of courage to come here,” says John. “They loved each other very much.”

After Alfred’s death in 2003, Edith donated to the Canadian War Museum in Alfred’s memory for many years. And when Edith passed away in 2015, on what would have been their 70th wedding anniversary, John began donating to the Museum to honour his parents.

Unaware that his mother used to give in memory of his father, John was deeply touched to learn about his family’s legacy of giving. “I think it’s wonderful that my mom used to donate,” he says. “People who sacrificed their lives for our freedom deserve to be recognized. I give because I want to show my appreciation for what my parents did.”

“Donating in memory of someone who served is very special,” says Kim Strydonck, Senior Fundraising Officer at the Museum. “It’s always the donor’s choice, but if you choose to discuss it with your family, it’s a way of ensuring that younger generations know about their ancestors, and the importance of our military history. And if multiple generations of your family support the Museum, you are both extending your family’s legacy and ensuring the Museum’s future.”

People’s motivations for supporting the Museum run deep. Many donors give because they, or a loved one or an ancestor, served in the military. It is a deeply meaningful contribution. Thank you!