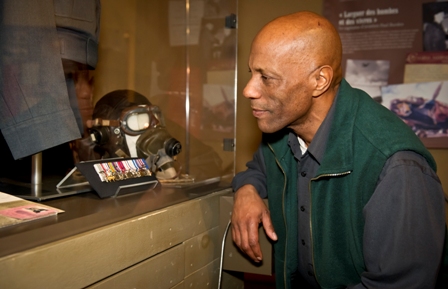 The Second World War was a vast and complex drama, carrying within it countless individual stories. One of these has been brought vividly to life in a special exhibition at the Canadian War Museum, New Brunswickers in Wartime, 1914–1946. Courage, sacrifice, triumph: Gerald Carty’s story has it all.

Born in 1925 in Saint John, New Brunswick, Gerald Carty was barely a teenager when the Second World War broke out. He enlisted as soon as he turned 18, in 1943. After basic training, he achieved the highest mark in his class on the written exam and was made a commissioned officer in the Royal Canadian Air Force (RCAF) at age 19, one of the youngest-ever RCAF-commissioned officers.

The RCAF was a family affair: all four of Gerald’s brothers served in the RCAF in various capacities and all of the Carty brothers survived the war. Their father had served in the First World War in a construction battalion.

Flight Lieutenant Gerald Carty served in Bomber Command in Europe, flying 35 missions in Wellington and Halifax aircraft over German-occupied Europe. He was wounded in action and recovered in Watford, England. For his wartime service he received the Defence Medal, the War Medal (Victory Medal) and the Canadian Volunteer Service Medal and Clasp.

Gerald’s achievements didn’t stop with the end of the war. Back in Fredericton, he earned the first electronic technician certification ever issued in New Brunswick and started a business repairing radios and TVs. Later, he was a partner in Central Community Television, Fredericton’s first cable company, and in Air Acadia, a local charter flight service. He married his wife, June, in 1948 and with her raised three sons and a daughter.

He left his mark on Fredericton in many ways. He was an instructor and Commanding Officer of the Fredericton No. 333 Air Cadet Squadron and a founder and president of the Fredericton Flying Club.  He taught gymnastics at the YMCA, kept bees and even built airplanes in his garage. He was a member of the RCAF Association, the Elks Club, the Fredericton Lions Club, the Garrison Club, and the Canadian Legion. Gerald Carty died in 2008 at the age of 83.