The camera’s view of the Japanese forced relocation 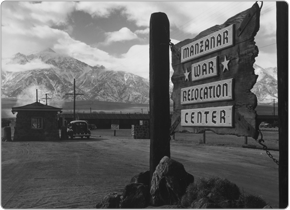 During the Second WorId War, Japanese Canadians and Americans were uprooted from their Pacific Coast homes, professions and businesses and forcibly relocated to makeshift camps in the interior. Twenty-five years after their governments issued an apology, a retrospective of the wartime work of two photographers captures the daily life of those relocated and sends a message to future generations.

The exhibition Two Views – Photographs by Ansel Adams and Leonard Frank shows the living conditions of some of the 22,000 Japanese Canadians and 120,000 Japanese Americans who were forcibly relocated following the 1941 bombing of Pearl Harbor. The two artists approached their subject with different motivations.

As a German immigrant living in California during the First World War, Leonard Frank was no stranger to xenophobia. To escape prejudice, he resettled in Vancouver, where he became one of the city’s most successful photographers. In 1942, the British Columbia Security Commission assigned him to chronicle the process by which Japanese Canadians were transferred by force from their homes to camps in the interior of the province.

Frank’s images show commercial and agricultural facilities put to wartime use. Registration took place in the horse-show building. The livestock building was converted into a milk lab and diet kitchen. School classes were conducted in the winter garden.

The underlying message? In the face of the massive task of relocating thousands of individuals, the government provided essential necessities, including food, health care and education. What’s unseen is the terrible financial and emotional price wrung from those whose property was confiscated and sold to pay for their forced relocation. In most of these photos, individuals get on with their jobs and show no sign of stress or disruption. But perhaps the most powerful image is one without people: a hockey arena where empty dormitory beds stretch row after row, waiting for hundreds of men being relocated from their homes.

Meanwhile, the renowned American photographer Ansel Adams was so outraged by the internments in his country that he made several visits to the Manzanar War Relocation Center, wartime home to 10,000 Japanese Americans.

Like Frank, Adams took panoramic shots to demonstrate the scale of the process, but he also captured the personalities of individuals. His subjects are depicted as ordinary Americans, trying — under extraordinary circumstances — to live a typically U.S. lifestyle, which included playing baseball within the confines of the camp. One of the most poignant images shows a letter on a tabletop, together with a photograph of a beloved Japanese-American son in U.S. military uniform.

Such images remind us that these people were uprooted from their lives in communities where their families had been established for generations. When the governments of Canada and the United States apologized to their citizens of Japanese origin in 1988, it was with a hope that such an act would never be repeated.

Two Views – Photographs by Ansel Adams and Leonard Frank is presented at the Canadian War Museum until March 23, 2014.