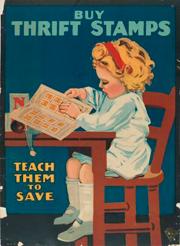 The teddy bear that accompanied Lieutenant Lawrence Rogers on the battlefield is small enough to fit in a pocket, a threadbare mascot with floppy ears and a mouth of cross-stitched embroidery thread. The soldier’s 10-year-old daughter, Aileen, sent the bear to keep her father safe in the trenches of the First World War, but Lieutenant Rogers died at Passchendaele.

Now Teddy helps tell the story of how the war affected Canadian society and the families left behind in The Home Front, 1917, a major update to the Canadian War Museum’s First World War permanent gallery.

“It’s very hard to find objects for The Home Front, 1917 because the families did not keep them as much as they kept letters from overseas or objects that belonged to soldiers,” says First World War historian and curator Mélanie Morin-Pelletier. “But in the end we do have some very powerful stories to present to the visitors.”

Opening to the public February 19, 2015, The Home Front, 1917 complements the Museum’s First World War permanent gallery. It shows how the war changed Canadian society by delving into the themes of politics, economy, industry and family life.

“What happened on the battlefield influenced what happened at home and vice versa,” says Morin-Pelletier. “Many things happened that would have an impact on the years to come, even up to today.”

Among other things, The Home Front, 1917 examines the conscription crisis, explaining how Prime Minister Sir Robert Borden initially promised not to introduce the draft, but changed his mind in 1917, when the number of Canadian soldiers killed in Europe vastly outstripped the number of voluntary recruits. It outlines the bitter debate that led to riots in Quebec, pockets of resistance elsewhere in the country and Borden’s decision to grant the vote to women whose next of kin were serving in the war in the hope they would bolster his electoral fortunes.

Women’s suffrage — extended in 1918 to all adult women British subjects — was one lasting legacy of the war. Income tax was another wartime measure that proved less popular, but equally enduring.

As for Aileen’s teddy bear, the battered good-luck charm speaks to a timeless human experience. “It’s a link to the First World War,” says Morin-Pelletier. “But it’s also a link to family members who leave for overseas service today and, in some cases, never come back.”