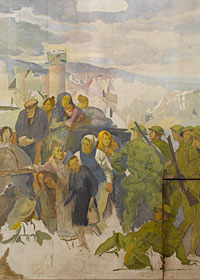 The Canadians Opposite Lens by Augustus John (detail)

On July 2, 2011, the Duke and Duchess of Cambridge came to the Canadian War Museum to meet veterans and their families and to unveilThe Canadians Opposite Lens, a remarkable painting by celebrated British artist Augustus John (1878–1961). Twelve metres (40 feet) wide and 3.7 metres (12 feet) high, the unfinished First World War canvas depicts Canadian troops, refugees and prisoners of war against the battle-scarred landscape near Vimy Ridge, in the area of the French town of Lens. Although the most significant Canadian-commissioned painting from the conflict, it had never before been on public view.

The story of the painting is intertwined with that of the man who commissioned it — Canadian-born Lord Beaverbrook, who became a powerful British press baron, politician and philanthropist. He envisioned The Canadians Opposite Lens as the centrepiece of a majestic war memorial art gallery in Ottawa. The gallery was never built and, as a result, Augustus John never finished the painting. When he died in 1961, it was still in his London studio. Sold at auction, it disappeared into private hands for a half-century.

Its recent acquisition, which completes the War Museum’s collection of major art works commissioned for the war memorial art gallery, was made possible by the Canadian Museum of Civilization Corporation’s National Collection Fund—and by generous support from the Beaverbrook Canadian Foundation. The Foundation has long been a major donor to the War Museum.

The National Collection Fund, which is supported by donations, was critical to the acquisition. “Great artifacts and art works that tell the story of Canada’s history are still out there,” said James Whitham, Acting Director General of the Canadian War Museum. “Donations to the Fund help the Museums acquire these treasures so that they remain a part of our shared heritage.”

Before its acquisition by the War Museum, The Canadians Opposite Lens was attached to two walls of a music room in a home in the Chelsea district of London, England. To fit the display space, it had been cut into two main panels and a smaller panel to accommodate a door. “Fortunately this had been done carefully, with concern for protecting the painting,” said Whitham.

The Museum intends to reassemble and restore the painting in a public area, although the exact location has yet to be determined. “It has to be a large space because we want visitors to be able to back up and view the whole work,” Whitham explained.

Dr. Laura Brandon, War Art Historian for the Museum and the person who relocated the painting in the early 1990s, believes that visitors will be impressed. “Because this painting is unknown, it shocks you into a fresh perspective on how people saw the war in 1919,” she said. “And because it’s unfinished, I feel it’s a metaphor for how we continue to revisit Canada’s role in the First World War.”