War Museum historian’s tale of the Cold War in Canada 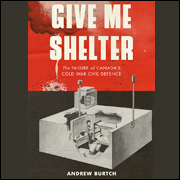 People called it the Cold War, the era when the world seemed to teeter on the edge of an atomic Armageddon. It was a harrowing time of home fallout shelters and public service announcements telling frightened citizens to “duck and cover” in the event of a nuclear holocaust.

Faced with potential annihilation, ordinary Canadians reacted with general indifference, while there was confusion regarding jurisdiction among the various levels of government.

Give Me Shelter: The Failure of Canada’s Cold War Civil Defence (UBC Press, 2012) by Canadian War Museum historian Andrew Burtch, winner of this year’s C.P. Stacey Award for most distinguished book on Canadian military history, tells the story of Canada’s half-hearted, haphazard attempts to deal with the threat of nuclear war in the two decades following the end of the Second World War.

In Canada, serious planning began in the late 1940s. “All across the Western alliance,” says Burtch, the Museum’s historian for the post-1945 period, “it seemed reasonable that governments should have some kind of program in the advent of nuclear attack.” But the specifics of the program changed as nuclear weapons evolved. The initial model, he says, “was the London Blitz applied to the nuclear age” — individuals were trained as firefighters, air-raid wardens and nurses on the assumption that enough people would survive the initial attack and could then help the wounded and fight the fires. By the early 1950s, however, with the development of more powerful bombs — the “city killers” — the emphasis was on evacuation. And the advent of intercontinental ballistic missiles in the late 1950s called for a “stay put approach. You built a shelter to put some protection between your family and atomic fallout.”

The entire civil defence program, says Burtch, was “dogged by apathy. In the dark days of the Korean War or the Cuban missile crisis, tension was high” and so was speculation. But unless confronted by crisis, people showed no concern. “Once the emergency passed, and things looked like they were under control, their interest faded almost immediately.” When an ambitious evacuation exercise in Calgary had to be cancelled because of a heavy snowfall, “the mayor said if the weather had been that bad the Soviets wouldn’t have attacked anyway.” Differing levels of government squabbled over who should pay for civil defence or whether to be involved at all. “British Columbia and Alberta were really up on it in the 1950s. Ontario and Quebec were not, and refused all funding.”

Responsibility for civil defence was kicked from ministry to ministry. After 1968, the Cold War rhetoric began to cool, the sense of urgency faded altogether and civil defence was forgotten. But, says Burtch, it never entirely disappeared. “Public Safety Canada,” the government ministry in charge of protecting the safety of Canadians today, “is in one way a direct offshoot of it.”

The C.P. Stacey Award is presented by the Canadian Committee for the History of the Second World War and the Canadian Commission for Military History. It recognizes the year’s most distinguished publication on the 20th-century military experience. In winning this prize, Burtch joins a number of current and previous colleagues at the War Museum. “Tim Cook, Dean Oliver, Jack Granatstein . . . I feel like I’m carrying on a bit of a tradition,” he says.