The Internment of Ukrainian Canadians

At the outset of war in August 1914, the Canadian government quickly enacted the federal War Measures Act (WMA). The Act’s sweeping powers permitted the government to suspend or limit civil liberties in the interest of Canada’s protection, including the right to incarcerate “enemy aliens”.

The term “enemy alien” referred to the citizens of states legally at war with Canada who resided in Canada during the war. Under the authority of the WMA, Canada interned 8,579 enemy aliens in 24 receiving stations and internment camps from 1914-1920. Otter classified 3,138 as prisoners of war, while the others were civilians. The majority of those interned were of Ukrainian descent, targeted because Ukraine was then split between Russia (an ally) and the Austro-Hungarian Empire, an enemy of the British Empire. In addition to those placed in camps, another 80,000 enemy aliens, again mostly Ukrainians, were forced to carry identity papers and to report regularly to local police offices.

The government frequently employed internees on massive labour projects, including the development of Banff National Park and numerous mining and logging operations. Sir William D. Otter, one of Canada’s pre-eminent soldiers, commanded the operation of these often rural and remote internment camps. Internees had much of their wealth confiscated, although most were paid $0.25 a day, far less than that offered to labourers of the time period. Interned Canadians were also disenfranchised during the course of the war.

An Acknowledgement of Innocence

War-time fervour and xenophobic fear had been the main factors driving the policy of internment, and not actual attacks on Canada’s domestic war effort by enemy sympathizers. There were a few inept plans for sabotage on Canadian soil, and fear of a German invasion persisted for several years, but no serious threats materialized.

Since 2005, negotiations have taken place between members of the Ukrainian-Canadian community and the government over issues of redress.

A rare panoramic view of the internment camp at Valcartier as it existed in 1915. The Valcartier camp closed in October 1915. Its 146 internees were transferred to camps at Spirit Lake and Kingston. Twenty-six receiving stations and internment camps existed across Canada from 1914-1920, holding 8,579 "enemy aliens." 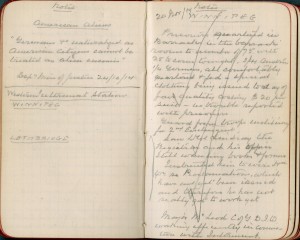