04 Life at Home During the War Voices for Peace

A conscientious objector refuses to engage in military service or go to war because doing so would conflict with deeply held personal beliefs. These can be based on religious conviction or experience, or moral and ethical considerations. Canada had recognized conscientious objector status since the late eighteenth century, but people claiming it during the First World War sometimes had difficulty convincing military tribunals that their grounds for exemption were genuine.

The Military Service Act (MSA) that introduced compulsory service to Canada in 1917 contained vaguely worded language on the subject of conscientious objectors. It appeared to exempt several religious denominations from combatant service on grounds of conscience, but did not call the churches by name and failed to confirm whether religious objectors could be called to non-combatant service. Given the uncertainty, many religious pacifists found it easier to claim exemption as farmers rather than as pacifists because farmers could be excused from all forms of military service.

Appeals from Peace Churches and Groups

The historic peace churches petitioned Ottawa to clarify the rules. In July 1918, the central appeal judge decided that Mennonites, Seventh-Day Adventists, the Society of Friends (Quakers), and several other groups qualified as pacifist sects eligible for exemptions. But Parliament had already ended all general exceptions to compulsory military service. Approximately 93 percent of those called to register under the Military Service Act had appealed for exemptions of one sort or another, and Ottawa, responding to intense public pressure, was in no mood for continuing blanket exceptions.

Religious pacifists could still claim exemption with reasonable prospects for success, but their legal status under the MSA remained confused until the end of the war.

Individuals claiming exemption from military service as conscientious objectors were required to have their status confirmed by official tribunals. Often comprised of local patriots, the tribunals exercised wide latitude in the review and determination of cases. A claimant’s success depended on his ability to prove membership in a pacifist denomination deemed acceptable under the MSA, a possibility made more difficult in the confusion of 1918 after all blanket exemptions had been terminated. Members of tribunals were often unaware of the nature of religious pacifism, and many dismissed exemption claimants as “shirkers.”

Claims for conscientious objector status could not be made by members of established churches, although some members tried, and tribunals were especially unsympathetic to exemption requests based on reasons of personal conscience alone. Rejected applicants for conscientious observer status who refused to serve, faced military justice and possible prison terms. In January 1919, more than 100 remained in custody.

Most religious exemptions were granted in Ontario and Western Canada, both sites of substantial immigration by Mennonites, Quakers, and other peace churches. There is no confirmed total of those granted conscientious objector status, but the number was probably in the low thousands. 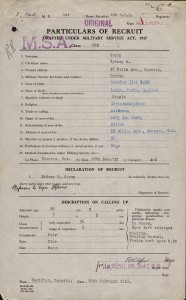