Clearing battlefields effectively and quickly was essential to saving lives. But the masses of wounded, as well as the often muddy conditions, meant that moving a soldier back through the lines to better medical care in rear area hospitals could take hours.

Stretcher-bearers had the grim task of clearing the wounded from the battlefield, but Allied troops often used German prisoners to assist them. At times, temporary truces allowed the work to be completed, but stretcher-bearers usually had to brave bullets and shell fire to reach the wounded.

Even with stretcher-bearers and prisoners, there was often a shortage of labour to transport wounded soldiers to the rear. Horribly injured troops were left frequently on their own to stagger or crawl to the rear in search of medical attention. Many did not survive the journey. 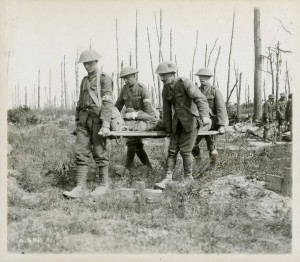 Soldiers of the 5th Battalion carry a wounded soldier to a light railway located a few kilometres behind the lines. The wounded man wears bandages on his wrist and head, indicating that he has received first aid. Two men wear armbands bearing the initials "SB" for "stretcher-bearers." They appear to be walking through a ruined forest and past graves.

Bringing in the Wounded 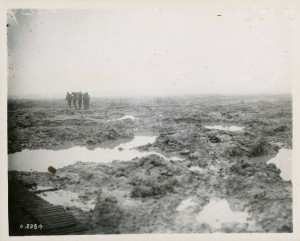 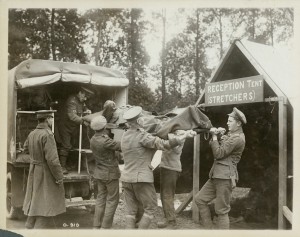 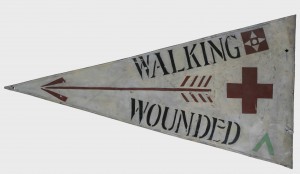