The pressure and challenge of war led to the development of new medical techniques.

One of the most important new developments was the process of blood transfusion. The quick replacement of lost blood helped prevent the wounded from going into shock and dying. Still in its early stages of development, and without refrigeration in the front lines, transfusion required the transfer of blood from donors to the wounded using tubing or a syringe. Though not always successful, it marked an important evolution in combat surgery.

New methods of treating broken bones, the extraction of metal from sensitive body parts using magnets, the cleaning of wounds to avoid infection, and dealing with the horrific aftermath of poison gas all led to improvements in combat medicine. Almost 90 percent of wounded soldiers who received medical treatment survived. Doctors eventually brought home these surgical improvements and used their new-found knowledge to treat civilian patients in countless Canadian communities.

This surgeon's kit held instruments used for general surgery in the field. With it, the surgeon could extract bullets and shell fragments and suture wounds. The canvas case rolled up, making the kit easy to transport, an essential asset on the battlefield. 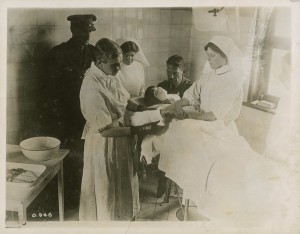 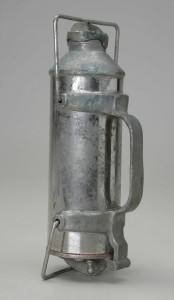