All armies embarked upon a difficult learning curve during the war as soldiers studied past operations for lessons that might be applied to future ones. Despite the similarities of some previous wars to this one, no one had predicted the extent, durability, or cost of the trench war that resulted.

While the war on the Western Front was largely static, with the trench systems rarely moving, it was also a world of constant change. Weapons, tactics, and doctrine developed during the war as soldiers, from the highest general to the lowest private, sought ways to survive on the battlefield and break through the enemy’s trenches.

Innovation and Evolution at the Front

Each arm, from the infantry and artillery to the engineers and medical units, evolved in response to war:

The principal tactical objective was to keep moving and to not allow the enemy time to recover by deploying reserve troops or reinforcing a threatened area.

Combined Arms: The Key to Success

By 1917, the Canadians had learned that the key to success in battle was the close coordination of artillery and infantry, as well as tanks, machine-guns, combat engineers, chemical weapons, the supply system, and aircraft.

This ‘combined arms’ approach helped Canadian troops overcome the inherent advantages of terrain and position enjoyed by Germans fighting for most of the war on the defensive. 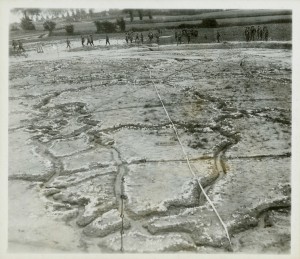 This is a photograph of a large-scale model of German trenches northwest of Lens in 1918. Models like this were first introduced in early 1917 to allow officer and soldier to better understand the terrain, enemy trenches, and strong points they would encounter in the advance. Pre-battle training and preparation improved the attackers' chances for success and survival. It also lowered the risk that an attack might bog down when senior officers were hit or out of communication by sharing knowledge of the terrain and objectives with many other soldiers.

Canadians Repairing a Track Under... 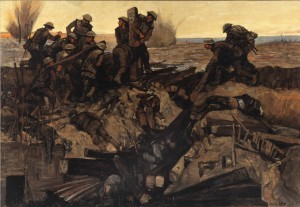