Henri Bourassa was a leading French-Canadian nationalist. A successful politician and journalist, he opposed Canada’s close imperial connections, its imposition of conscription, and the concentrations of personal wealth and industry encouraged by the war.

Although elected to parliament in 1896 as a Liberal under Wilfrid Laurier, Bourassa opposed his government’s decision to contribute troops to the South African War (1899-1902). He feared establishing a precedent that would lead to Canadians fighting in other imperial wars, and consistently opposed the ability of prime ministers to contribute troops to armed conflict without the consent of Parliament. Bourassa resigned his seat in 1899 to protest Laurier’s actions, but was re-elected by acclamation the following year.

Bourassa left federal politics in 1907, but played a key role in the 1911 election. Founder in 1910 of the influential French-language paper Le Devoir, he used his journalistic clout to encourage an alliance of French-Canadian nationalists and English-Canadian Conservatives that defeated the Laurier Liberals. The main issues were free trade with the United States, and a new naval bill that would contribute Canadian ships to British service in time of war. Bourassa opposed both continental integration with the United States and closer imperial ties to Britain. His actions in defeating Laurier had an ironic result: the election of a Conservative, pro-imperial government that would lead Canada to an ambitious war program and, in 1917, to conscription.

In August 1914, Bourassa supported the war effort, but within a year he was questioning the nature and extent of Canada’s growing sacrifice. Regardless of the level of effort, Bourassa adamantly opposed compulsory service, which he referred to as a “blood tax.” War supporters in English Canada accused him of being a dangerous traitor, while Liberals opposed his attacks on the British connection and his strident belief that the fight for language rights in Canada was more important than an imperial war overseas. After passage of the Military Service Act in 1917, his support for peaceful protest against conscription may have prevented more violent forms of opposition from emerging. He had earlier prophesied a violent outcome if Ottawa imposed compulsory service, but afterwards supported adherence to the law, and the widespread granting of individual conscription exemptions through locally administered appeal tribunals.

Bourassa’s national influence faded after the First World War, although he remained politically active until his death in 1952. 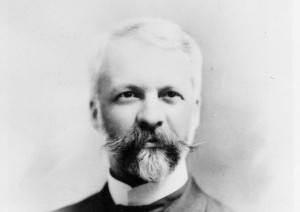 Politician and newspaper publisher Henri Bourassa was a fierce critic of Prime Minister Borden's conduct of the war. In a supposed fight for liberal ideals against the advance of German militarism, he could not accept the imposition of conscription on those who did not wish to fight.