Civilian-soldiers, most of them volunteers, comprised the bulk of Canada’s overseas military.

In the war’s early years, most Canadian troops were not Canadian born. In the First Contingent that went overseas in late 1914, 70 percent had been born in the United Kingdom. This reflected pre-war immigration from the British Isles and the patriotic ties between recent arrivals and the mother country, but it was still a high number. In Australia’s first contingent, for example, 73 percent were native-born. At war’s end, despite the compulsory service imposed by the Military Service Act, only 51 percent of the Canadian Expeditionary Force (CEF) was Canadian-born. The comparable figure for Australia was 84 percent.

An Army Drawn from Across the Country

The soldiers who formed the Canadian Expeditionary Force were drawn from across the country. While more Canadians lived in rural areas than cities, it is unclear if this divide was reflected in the CEF. Most units were actually recruited in urban centres, where much of the recruiting effort was directed, and statistical breakdowns by province only include data from the place of enlistment and not the place of birth. If a Maritimer enlisted in Winnipeg, the record would indicate that the recruit came from the West. Despite these limitations, it is clear that Ontario and the West contributed the most troops, while Quebeckers and Maritimers enlisted in proportionately fewer numbers. This may have been due to several factors:

Of the almost 620,000 Canadians who enlisted voluntarily or were conscripted, roughly 424,000 served overseas in the Canadian Expeditionary Force.

A Social History of the Soldier

Most Canadian soldiers were between the ages of 18 and 45, as per regulations, but thousands served who were younger or older, lying about their birth date to enlist. The oldest recorded member of the CEF was 80, while the youngest was ten. The average age of the Canadian soldier was 26.

Eighty percent of the CEF were bachelors. Most recruits were literate, but they would not on average have stayed in school beyond Grade Six, as was customary in Canadian society at the time. They carried overseas a strong culture of music and singing, informed by social custom, education, and religion. The CEF was a religious army and most soldiers upon enlistment noted their religion on their Attestation paper.

Patriotic romanticism reinforced by official propaganda forged a reputation that the Canadians were an army of fearsome lumberjacks, voyageurs, or cowboys, but most had been pre-war labourers, white-collar workers, or farmers. The Canadians nevertheless took great pride in differentiating themselves from British troops, even – or perhaps especially – by their well-documented tendency toward indiscipline. Soldiers of the First Contingent especially were noted for pushing the boundaries of proper military behavior, calling officers by their first names or refusing to salute. By 1917, senior commanders, including Sir Douglas Haig, recognized the Canadians as an effective military force, but their carefully self-cultivated reputation for restlessness, brawling, and indifference to military etiquette continued throughout the war.

The Canadians resented being mistaken for other imperials. They responded to “Canada,” “Canuck,” or just “Tommy” when addressed as such by Allied troops or civilians, and took overseas many of the songs, idioms, and attitudes that had marked their lives in Canada. While the Canadians wore similar uniforms and carried similar weapons as British troops, they sported unique unit cap badges and shoulder bars that read “CANADA.” 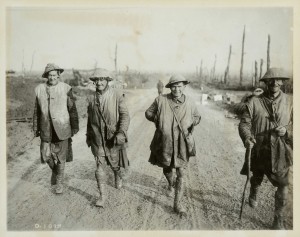 A Quartet of Happy Canadians

Four Canadian Highlanders smile as they walk along a muddy path away from the front lines. Kilts and bare knees can be seen beneath the veneer of mud. The three soldiers on the right wear respirator bags slung across their chests; all four wear the popular sleeveless leather jerkin.