At the May 1915 Battle of Festubert, Canadian troops gained little ground and suffered terrible casualties.

Just south of the Ypres salient, Sir Douglas Haig’s First British Army had suffered 11,000 casualties in an unsuccessful attack on Aubers Ridge on 9 May 1915. Less than a week later, he ordered another push, this one involving two Canadian brigades.

The Canadian forces had almost no time to prepare for the operation. Their maps contained inaccurate information and they were poorly supported by the artillery. The Germans had all the advantages of terrain and firepower and could observe preparations for the assault.

The Canadians launched several frontal assaults, but the attacking infantry were cut down by well-positioned enemy machine-guns. The Canadians made small gains over a week of fighting, but incurred 2,468 casualties in a series of largely unsuccessful attacks. Since the Second Battle of Ypres less than a month earlier, the Canadian Division had suffered more than 8,500 casualties. 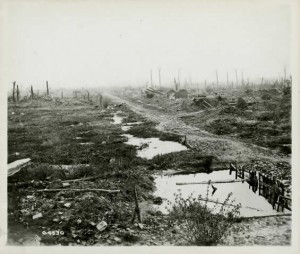 This photograph of the ruined battlefield near Festubert was taken in the spring of 1919. The Canadians fought at Festubert in May 1915, but no official photographers accompanied them to the front. The ground still shows the scars from the heavy fighting, four years after the battle.

Heroes of St. Julien and Festubert 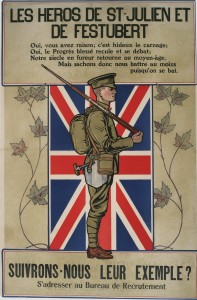