The Battle of the St. Eloi Craters was the first major engagement for the 2nd Canadian Division, recently arrived from England. It ended in disaster.

British forces had previously blown a series of underground mines to destroy the sector’s German defences, but the effort had left massive, mud-filled craters for the attackers to occupy. When the Canadians relieved British troops on the night of 3 April, they found few actual trenches in which to take cover, and most of those were waist-deep in water. The entire front was also under observation and incessant fire from the Germans.

A series of German counterattacks on 6 April drove the Canadians out of the muddy craters and sowed confusion throughout the division and at higher headquarters.

Through two weeks of hard fighting, Canadian commanders were often unclear as to the location of their troops. Most soldiers dug in under heavy fire and divided by the shell-pocked terrain, could supply their commanders with little accurate information on the progress of the battle.

After aerial photography helped reveal the true German and Canadian positions, the battle ground to a halt on 16 April, with enemy forces holding most of the key points.

The Canadians suffered 1,373 casualties during the confused fighting at St. Eloi. The Corps commander, Lieutenant-General E.A.H. Alderson, was replaced by Sir Julian Byng, an experienced and respected British general. 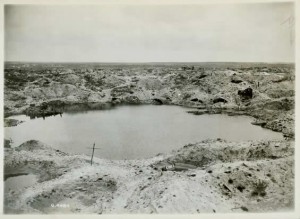 One of the large craters on the St. Eloi battlefield where the 29th Battalion was engaged in heavy fighting in April 1916.This photograph was probably taken some time after the battle. In the foreground craters, the water has dried up, the battlefield dead have been cleared and buried, and the road, visible in the distance, is fully functional. 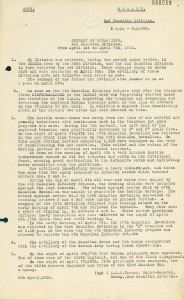