The Canadians fought the Battle of Mount Sorrel in the Ypres salient from 2 to 13 June 1916.

German Attack in the Ypres Salient

In the summer of 1916, the Canadian Corps held the southern part of the Ypres salient. The Germans attacked the Canadian lines to secure the last remaining high ground still in British hands. They also sought to divert Allied resources from the large offensive they knew was being prepared in the Somme region.

The 3rd Canadian Division, which had been formed in December 1915, was the target of a crushing German bombardment on the morning of 2 June. The barrage devastated the forward Canadian positions and killed hundreds, including the division commander, Major-General Malcolm Mercer. German infantry then swept forward, capturing Canadian positions at Mount Sorrel and on two surrounding hills. A hastily organized counterattack on 3 June failed. Three days later, the Germans exploded four mines under the Canadian positions and captured the village of Hooge.

The Canadian Corps commander, Sir Julian Byng, was determined to retake the lost ground and attacked, after a heavy artillery bombardment, during the early hours of 13 June. In this major set-piece battle, the Canadians drove back the Germans and recaptured much of the lost ground.

The Battle of Mount Sorrel lasted for almost two weeks and cost the Canadians over 8,000 casualties. Having lost the first two phases of the battle, the Canadians achieved victory in the final operation. Careful planning and concentrated artillery bombardments had begun to tip the balance on the First World War battlefields in favour of attackers over entrenched defenders. 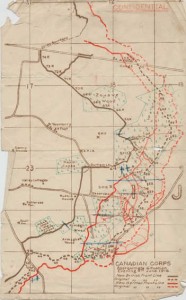 Canadian Positions after the First Attack

This map illustrates the 'British' or Canadian positions (in brown) and the German lines (in red) on 4 June 1916, during the Battle of Mount Sorrel. The Canadians have been driven from several strong points, including Hooge (north), Mount Sorrel itself (south), and most of Observatory Ridge (centre). 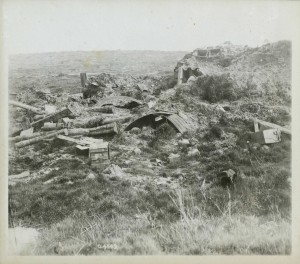