Andrew McNaughton was a civil engineer and an artillery specialist who rose from command of a single battery in 1914 to lead the Canadian Corps’ heavy artillery in late 1918.

McNaughton, a pre-war militia officer, commanded a battery of guns in September 1914 and was wounded at Ypres the following April. A gifted engineer who had taught at McGill University in Montreal, McNaughton had a keen mind for science and an easy style with people that earned him respect, success, and promotion.

After commanding several batteries, McNaughton was given the important position of Counter-Battery Staff Officer in February 1917. He developed or perfected new scientific gunnery principles, including “spot-flashing” and “sound-ranging,” to improve the Canadians’ ability to identify, target, and neutralize enemy gun positions. Working in conjunction with heavier bombardments, curtains of indirect machine-gun fire, smoke shells, aircraft, and the creeping barrage, counter-battery fire now became increasingly effective in suppressing enemy guns. These techniques permitted Allied troops to close on their objectives with fewer casualties, especially as they crossed No Man’s Land, and made it difficult for enemy forces to move up in support of threatened areas. McNaughton was decorated several times during the war for his achievements. By late 1918, as a 31-year-old acting brigadier, he commanded the entire heavy artillery and counter-battery forces of the Canadian Corps.

McNaughton had a long and illustrious postwar career. He was Chief of the General Staff from 1929 to 1935 and president of the National Research Council from 1935 to 1939. During the Second World War, he commanded successively an infantry division, a corps, and First Canadian Army. He resigned the latter command in December 1943 when criticism by British generals had helped undermine his political support. McNaughton held the defence portfolio in 1944-1945 in the government of W.L.M. King, and for two decades thereafter was a leading Canadian diplomat and public figure. He died in 1966.

Andrew McNaughton was one of the war's leading gunners. He introduced new scientific gunnery principles and commanded the Canadian counter-battery section that gathered and processed information on enemy guns and strong points. This photograph, from 1919, shows McNaughton as a brigadier-general holding his officer's swagger stick. The red tabs on the collar reveal that he is part of the general staff. 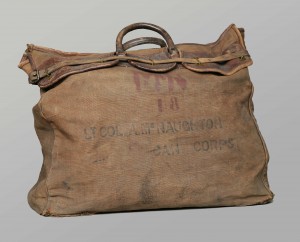