Alderson commanded the 1st Canadian Division upon its arrival in England in October 1914, and would serve as the Canadian Corps’ first commander, from September 1915 until May 1916.

Alderson, an experienced British general who had led Canadians during the South African War (1899-1902), assumed command of the 1st Canadian Division when the Canadians arrived in England in October 1914. He trained the force in England over the following winter, sacking incompetent officers and improving equipment. He took the Canadians to France in February 1915 and commanded them during the brutal, confused fighting at the Battle of Second Ypres in April. Although outnumbered, outgunned, and facing the first lethal chlorine gas attacks in the history of warfare, the division successfully defended the Ypres salient at the cost of 6,000 killed, wounded, and missing.

Alderson took command of the newly-formed Canadian Corps in September 1915 with the arrival to France of the 2nd Canadian Division. It was a difficult appointment. Politicians in Canada continually interfered with his command, often urging him to find senior appointments for officers foisted upon him for political reasons. Alderson pushed back. He also tried to have the Ross rifle discarded as a battlefield weapon. As a result, he endured an acrimonious, uneasy relationship with Canada’s powerful Minister of Militia and Defence, Sir Sam Hughes, the Ross rifle’s staunchest defender, who maneuvered against Alderson through much of the war.

Alderson was removed from command of the Canadian Corps in May 1916 after the disastrous Battle of St. Eloi. In the aftermath of this defeat, Alderson’s British superiors and Canadian authorities in Ottawa rejected his recommendation that two senior Canadian officers be fired for their poor performance. Both groups feared that the suggestion would destroy morale in the 2nd Division and create unwanted political issues, including the public perception of a rift between British and Canadian senior officers. Instead, Alderson was removed and given the largely symbolic post of Inspector General of Canadian Troops overseas, a move that effectively ended his military career.

Alderson’s leadership had helped the Canadian Corps evolve into a more effective fighting force, but his influence would be overshadowed by the two commanders who followed him, Sir Julian Byng and Sir Arthur Currie. He resigned from military service in 1920 and died in 1927. 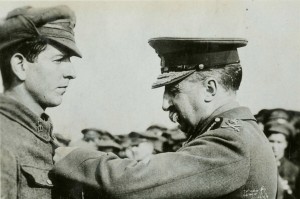 Lieutenant-General E.A.H. Alderson, an experienced British general, commanded the 1st Canadian Division upon its arrival in England in 1914. He served as the first corps commander from September 1915 until his removal in May 1916 after the disastrous Battle of St. Eloi. In this photograph, he pins a gallantry award to a soldier of the 10th Infantry Battalion.