Machine-guns pre-dated the First World War by half a century and were in widespread use by 1914, but doubts about their role and effectiveness limited the use of machine-guns in most pre-war armies. Most early war machine-guns were heavy and relatively immobile, requiring a team of soldiers to use.

At first, only the Germans appreciated the power of machine-guns when used on the defence from prepared positions with overlapping fields of fire. All armies would soon learn this lesson, as the machine-gun, perhaps more than any other weapon, drove soldiers from the battlefield and into relatively safe trenches, dug-outs, and fortifications. Overcoming the stalemate created by the dominance of firepower would challenge armies for the rest of the war.

The Canadians went overseas with only four Colt machine-guns in each infantry battalion. The Colt was a good weapon, but it tended to jam after rapid-fire. It was replaced in 1916 with the Vickers, a heavier and more dependable weapon. The German equivalent was the MG 08 Maxim, crewed by five soldiers.

Heavy machine-guns were later removed from the infantry battalions and grouped into machine-gun units to centralize firepower. They often fired indirect barrages onto enemy lines or fixed positions such as crossroads or supply trenches. Infantry units received growing numbers of the Lewis light machine-gun, which could be carried by a single soldier and fired a 47-round drum magazine. The ammunition was carried by a second member, although in a battle there could be another two or three members of the team to ensure there was sufficient ammunition. The Lewis gun substantially increased the infantry’s firepower during an attack, which could also be supported by the massed fire of heavier weapons.

In the Canadian Corps and in all armies, more and better machine-guns were employed throughout the war, and more sophisticated techniques were developed for their use. The machine-gun remained a dominant battlefield weapon. 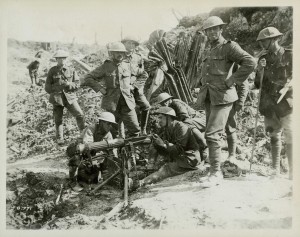 Soldiers test a Vickers heavy machine-gun. The water-cooled Vickers fired the standard .303-inch bullet (as did the Lee-Enfield rifle) from 250-round cloth ammunition belts. The Vickers could fire between 450 to 500 rounds per minute to a maximum range of 4,500 metres. It was an effective, reliable weapon but heavy and difficult to transport forward during a battle. 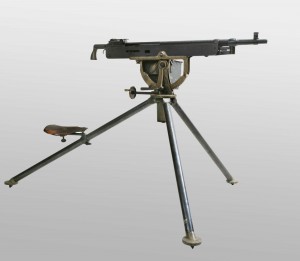 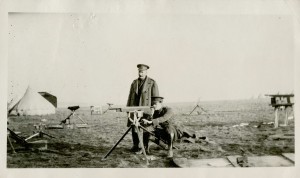 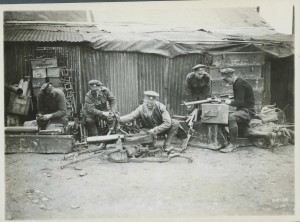 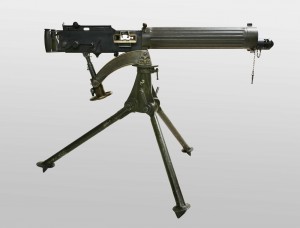