Go beyond the dogfights and immerse yourself in the lives of nine people, from both sides of the conflict, who experienced the first air war.

Join them as they train to fly, gather intelligence, fight aerial battles and drop bombs. Their stories — told with more than 80 authentic artifacts woven into an innovative graphic novel presentation — provide insight into the history and consequences of the first air war.

A series of gallery programs and interactive presentations will further immerse you in the experience of early air combat:

Balloon Observation Mission
Climb into a balloon basket and search for enemy activity on the Western Front.

Welcome to the Aerodrome
Suit up, assemble a map and get your airplane ready for action.

An exhibition developed by the Canadian War Museum with the generous support of the J. P. Bickell Foundation.

Why a graphic novel format?

Who will you meet?

Biplane on the Fridge!

The exhibition in pictures

Get your souvenir catalogue now 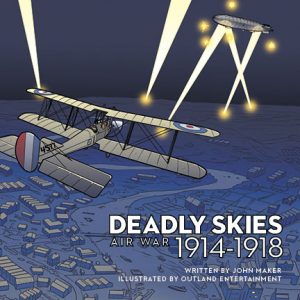 Complete your visit by picking up the Deadly Skies souvenir catalogue, on sale online and at the Museum Gift Shop.

John and Pattie Cleghorn and Family