The Hundred Days campaign (August 8 to November 11, 1918) contributed decisively to ending the First World War, and the Canadian Corps played a key role in the Allied victory.

Curated by Dr. Tim Cook and Dr. Jack Granatstein to coincide with the 100th anniversary of the end of the war, Victory 1918 – The Last 100 Days is a powerful and evocative exhibition that weaves artworks, artifacts, documents, film and photographs together with the powerful stories of Canadians who participated in this costly combat.

The exhibition is arranged chronologically by the key battles that led to the end of the war and the return of soldiers and nurses to Canada. An interactive activity hub occupies a central position in the exhibition. Powerful quotations, drawn from letters, diaries, and memoirs, appear throughout the exhibition. Through the meticulous efforts of the National Film Board and Canadian Colour, with support from the Vimy Foundation, newly colourized photographs and archival films, along with audiovisuals and soundscapes, enhance the visitor experience and bring fresh life to the faces of war.

Introduction: Prelude to the Campaign

In the summer of 1918, the Allies’ new commander, Marshal Ferdinand Foch, sensed opportunity and ordered a series of offensives. These would come to be known as the Hundred Days campaign, and the Canadian Corps was to spearhead the effort.

Led by Lieutenant-General Sir Arthur Currie, the Canadian Corps of 1918 was a battle-hardened formation of 100,000 soldiers in four infantry divisions. Although the Corps fought as part of the British Expeditionary Force, Currie, as a national commander and an experienced leader, had the power to demand that it be supplied with more guns, engineers and trucks than other British corps. By 1918, the Canadians had become the shock troops of the British forces.

The Battle of Amiens was a triumph of covert organization: the Canadian Corps, and all its supplies, moved secretly into position to surprise the Germans. Combined arms warfare — a coordinated attack by infantry, artillery, aircraft and the largest tank assault of the war — allowed the Canadian Corps to make a rapid, unexpected and deep advance into German lines.

In late August, the Canadian Corps was ordered to take the well-defended German trenches east of Arras. Behind a creeping barrage, Canadian infantry attacked German pillboxes bristling with machine guns. The grinding, costly battle is told from eyewitness accounts, and through large images and key artifacts. A replica pillbox and evocative soundscape deftly communicate the challenges facing the Canadians.

This section also explores the vital role of battlefield medicine. Field dressings, a surgical kit and discussions of new blood transfusion techniques, together with a digital interactive, will help visitors understand that the rapid transport of casualties to medical units — staffed with doctors, surgeons and nurses — often made the difference between life and death.

This space is intended as an intellectual and emotional break from the series of battles. Visitors can learn about the tactics required in combined arms warfare as they attempt to coordinate infantry, tanks, artillery, aircraft and communications through a hands-on tabletop interactive game and live interpretation. Eyewitness accounts, photographs and artwork highlight how soldiers coped with the strain of battle. A separate seating area provides a quieter space for rest and reflection.

The Canadian Corps crossed the Canal-du-Nord through innovative engineering, skilled tactics and tremendous courage. Once over the barrier, the Canadians fought a tenacious enemy, pushing forward to capture the strategic city of Cambrai, a logistical supply and rail centre.

An audiovisual presentation, maps and archival documents tell the story of Currie’s bold and risky plan to seize the Canal-du-Nord and Cambrai. Visitors will see how the Canadian engineers constructed bridges across the canal to move guns, supplies and vehicles. Personal stories and artifacts highlight the bravery of the Canadian soldiers in battle. A Victoria Cross awarded to Captain John MacGregor attests to the heroic nature of his actions while leading his men in battle.

After losing Cambrai, the Germans were in full retreat. The Canadian Corps gave chase, advancing dozens of kilometres a day, engaging in sporadic firefights, and liberating French and Belgian communities. Visitors will experience the rising hope that marked the last few weeks of fighting, including the final battle at Valenciennes (October 31 to November 2), the capture of Mons (November 11) and the Armistice later that day. An immersive theatrical presentation highlights the tension of the very last moments of the First World War, including the death of Canadian George Price, just two minutes before 11:00 a.m., the conflict’s official end.

Almost 300,000 Canadians came home to an uncertain future and the memory of horrific losses — some 60,000 Canadian men and women in uniform died during the war, and thousands more in its aftermath. Many of those who returned were physically or psychologically injured. Currie, one of the Allies’ most effective and successful military commanders, returned to accusations of a callous disregard for Canadian lives, particularly those lost during the Hundred Days campaign. Currie was eventually vindicated, and the war receded into the past. But it was never forgotten. Canadians have spent a century grappling with the sacrifices that forever changed their nation.

Get Your Souvenir Catalogue 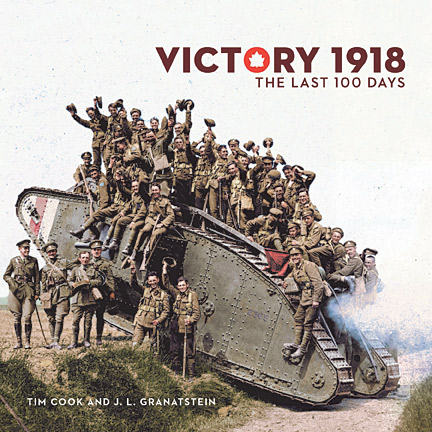 Complete your visit by picking up the Victory 1918 – The Last 100 Days souvenir catalogue, on sale online and at the Museum Gift Shop.

This exhibition is developed by the Canadian War Museum with the generous support of John and Elizabeth Irving.