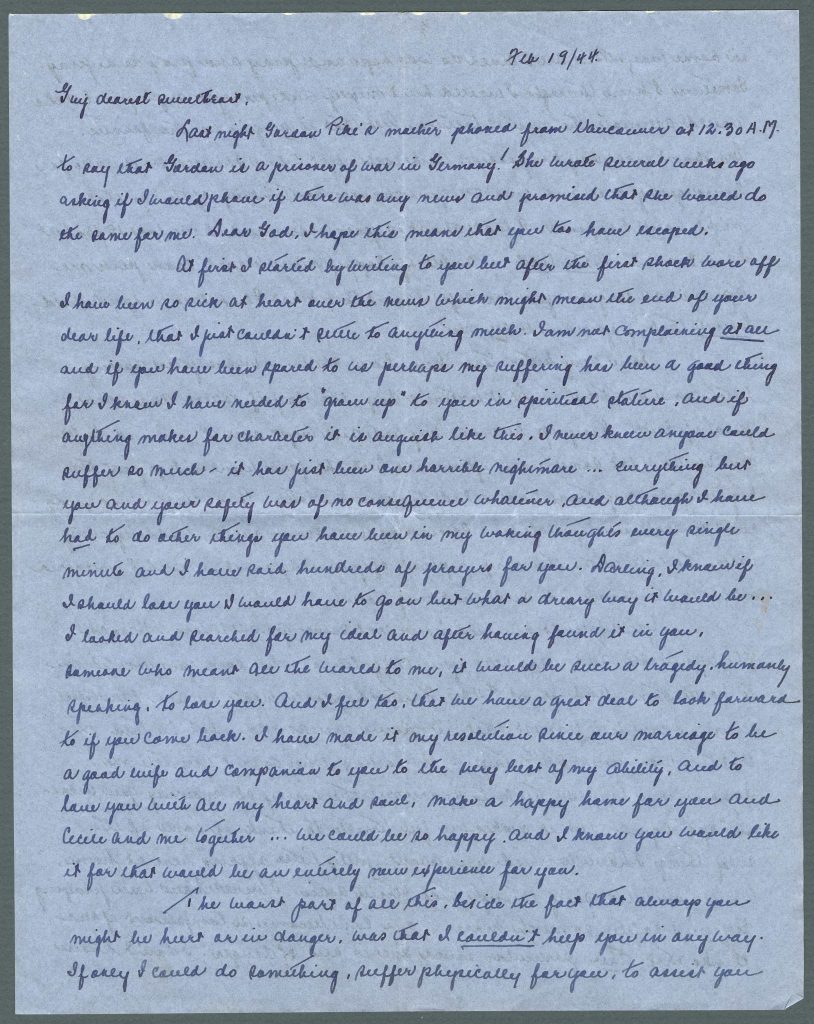 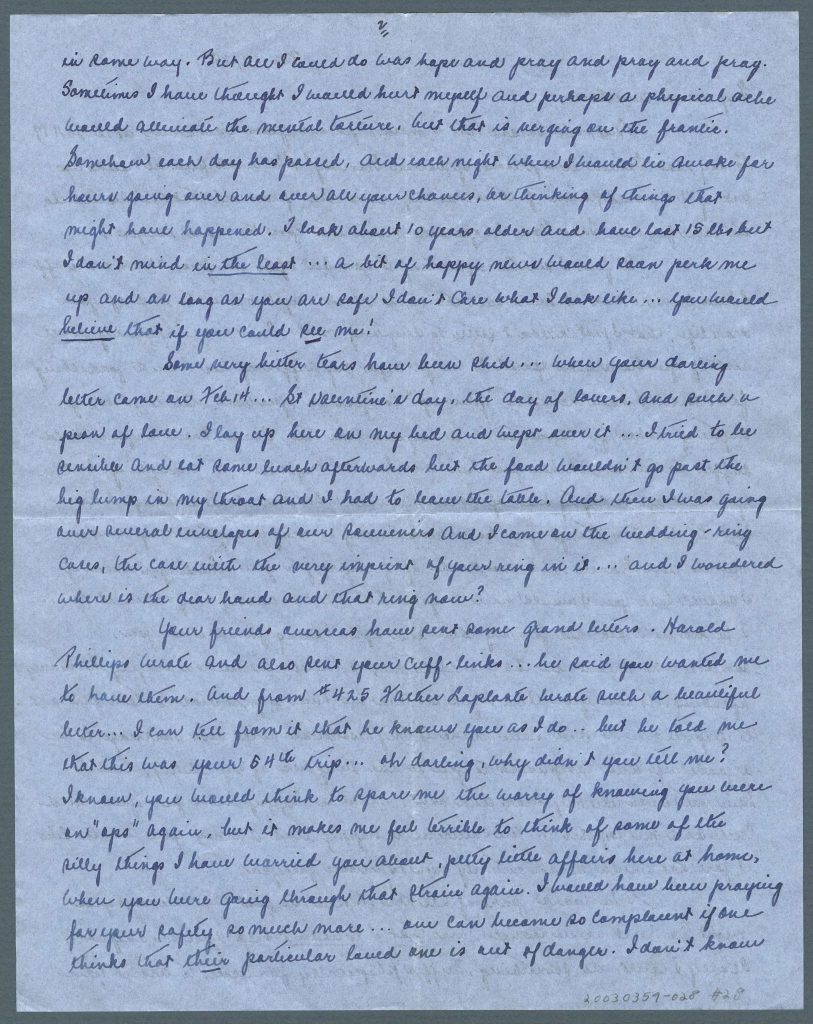 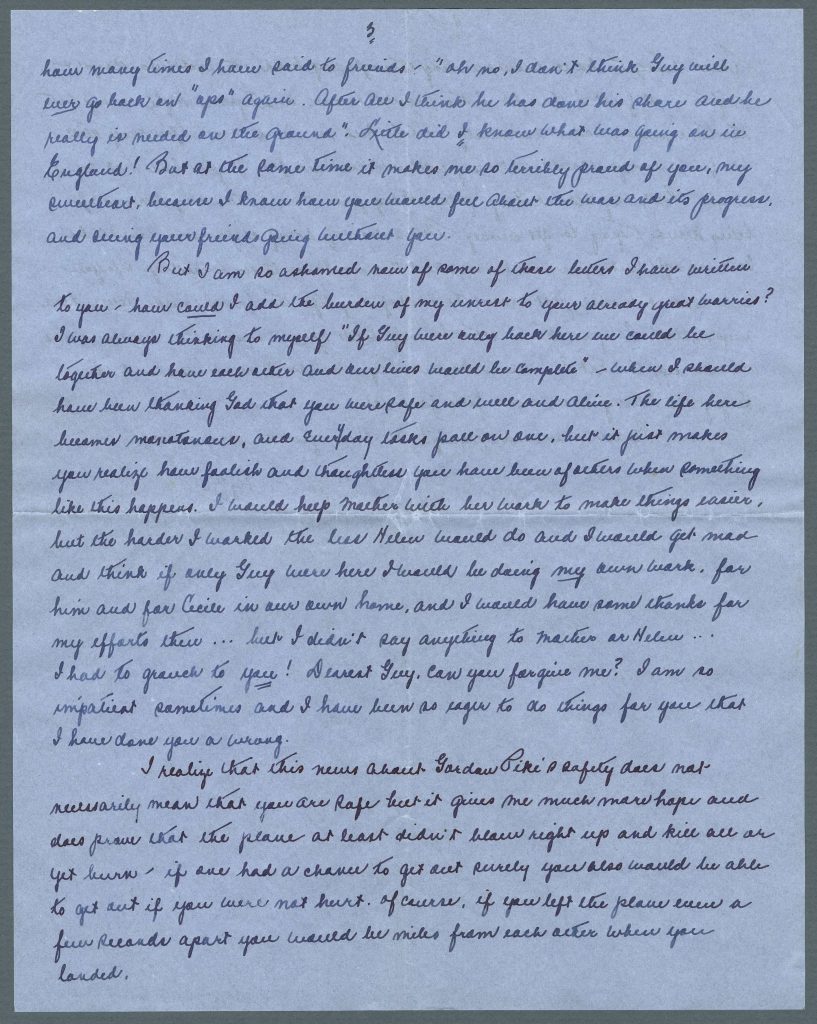 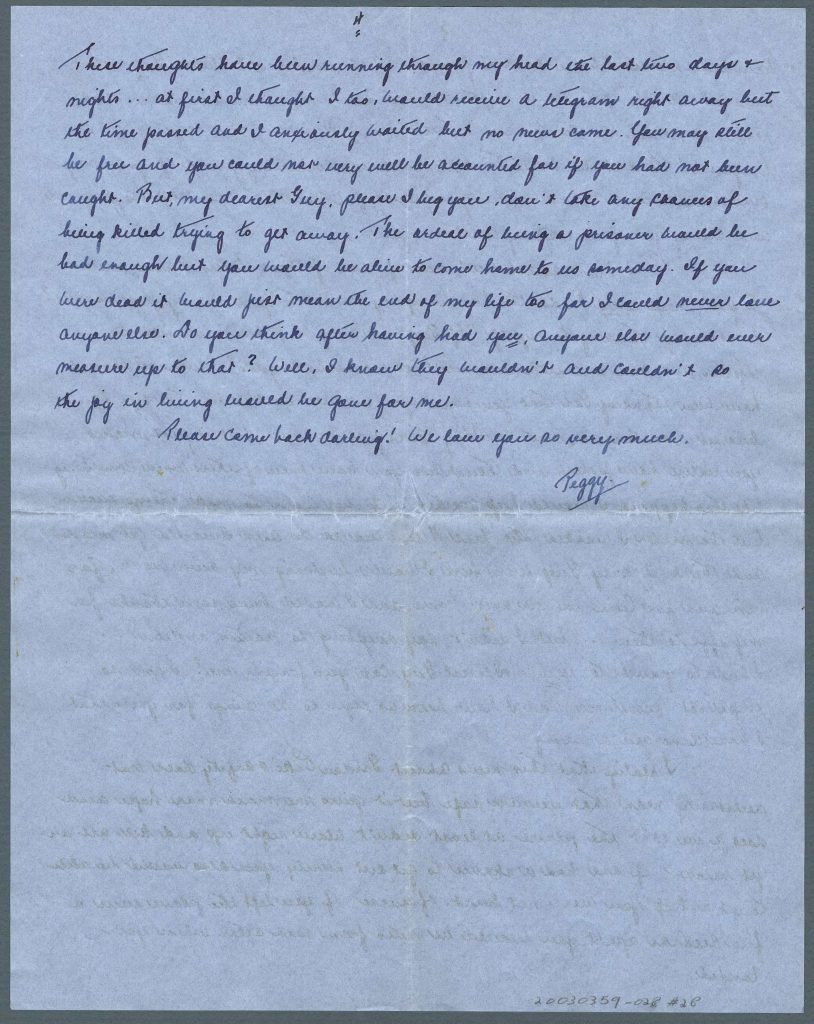 Peggy Hayes and Guy Rainville’s whirlwind romance broke the boundaries of geography, language and religion.  She was an anglophone bank teller from small town Ontario, and he was from a prominent French-Catholic Quebec City family. They married while Guy was at home to assist in the selling of Victory Bonds after his first tour of duty in Europe, raising funds and supporting the war effort in Quebec. Afterwards, he returned to Europe and began flying bombing sorties again. He was shot down on 14 January 1944 and declared missing in action.

At times despairing, regretful, or cautiously hopeful, this letter reveals the anxiety that Peggy experienced while her husband was missing. She likens it to “mental torture.” Though she did not know it yet, Guy survived, and was taken prisoner by the Germans. After almost 16 months in a German prison camp, Guy Rainville returned safely to his family in Canada.

Last night Gordon Pike’s mother phoned from Vancouver at 12.30 A.M. to say that Gordon is a prisoner of war in Germany! … Dear God, I hope this means that you too have escaped.

At first I started by writing to you but after the first shock wore off I have been so sick at heart over the news which might mean the end of your dear life, that I just couldn’t [?] to anything much. …

The worst part of all this, beside the fact that you might be hurt or in danger, was that I couldn’t help you in any way. If only I could do something, suffer physically for you, to assist you in some way. But all I could do was hope and pray and pray and pray. Sometimes I have thought I would hurt myself and perhaps a physical ache would alleviate the mental torture, but that is verging on the frantic. Somehow each day has passed, and each night when I would lie awake for hours going over and over all your chances, or thinking of things that might have happened. I look about 10 years older and have lost 15 pounds but I don’t mind in the least … a bit of happy news would soon perk me up and as long as you are safe I don’t care what I look like… you would believe that if you could see me!

But I am so ashamed now of some of those letters I have written to you—how could I add the burden of my unrest to your already great worries? I was always thinking to myself “If Guy were only back here we could be together and have each other and our lives would be complete”—when I should have been thanking God that you were safe and well and alive. The life here seemed monotonous, and everyday tasks fall on one, but it just makes you realize how foolish and thoughtless you have been acting when something like this happens. …

I realize that this news about Gordon Pike’s safety does not necessarily mean that you are safe but it gives me much more hope and does prove that the plane at least didn’t blow right up and kill all or yet burn—if one had a chance to get out surely you also would be able to get out if you were not hurt. Of course, if you left the plane crew a few seconds apart you would be miles from each other where you landed.

These thoughts have been running through my head the last two days and nights . . . at first I thought I too, would receive a telegram right away but the time passed and I anxiously waited but no news came. You may still be free and you could not very well be accounted for if you had not been caught. But, my dearest Guy, please I get you, don’t take any chances of being killed trying to get away. The ordeal of being a prisoner would be bad enough but you would be alive to come home to us someday. If you were dead it would just mean the end of my life too for I could never love anyone else. Do you think after having had you, anyone else would ever measure up to that? Well, I know they wouldn’t and couldn’t so the joy in living would be gone for me.

Please come back darling! We love you so very much.