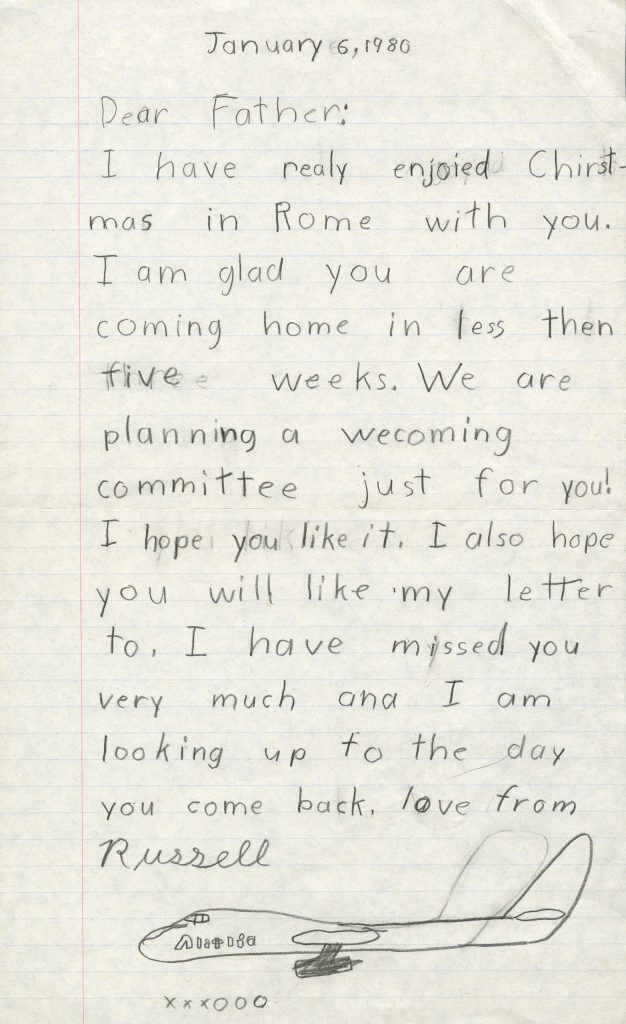 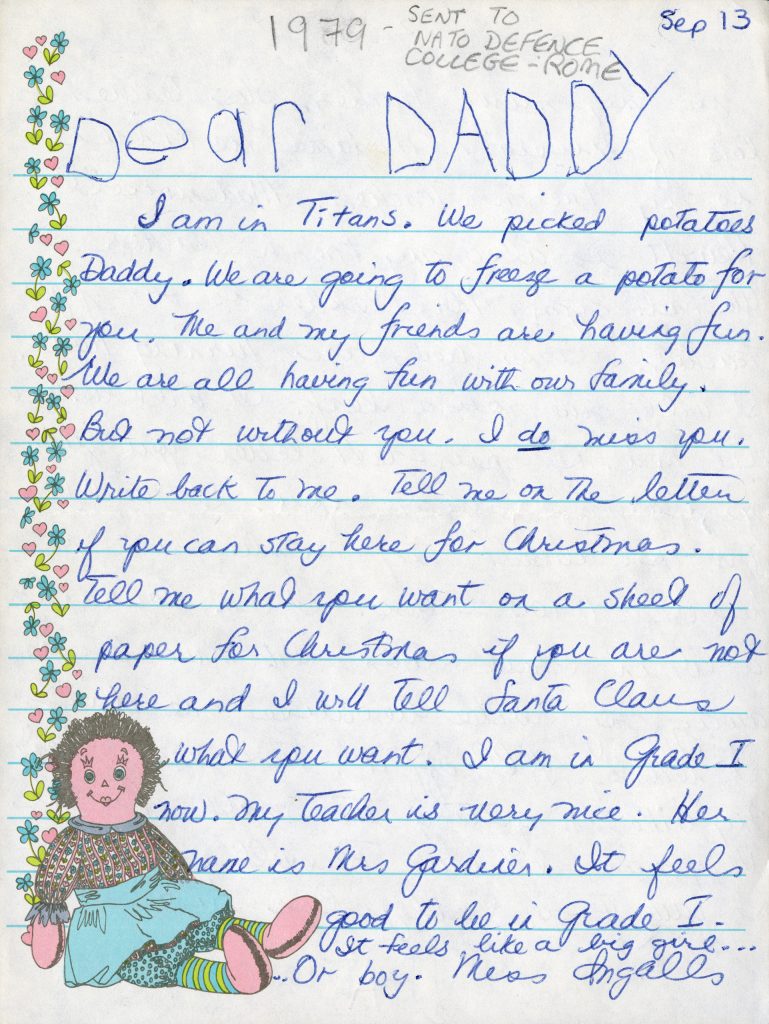 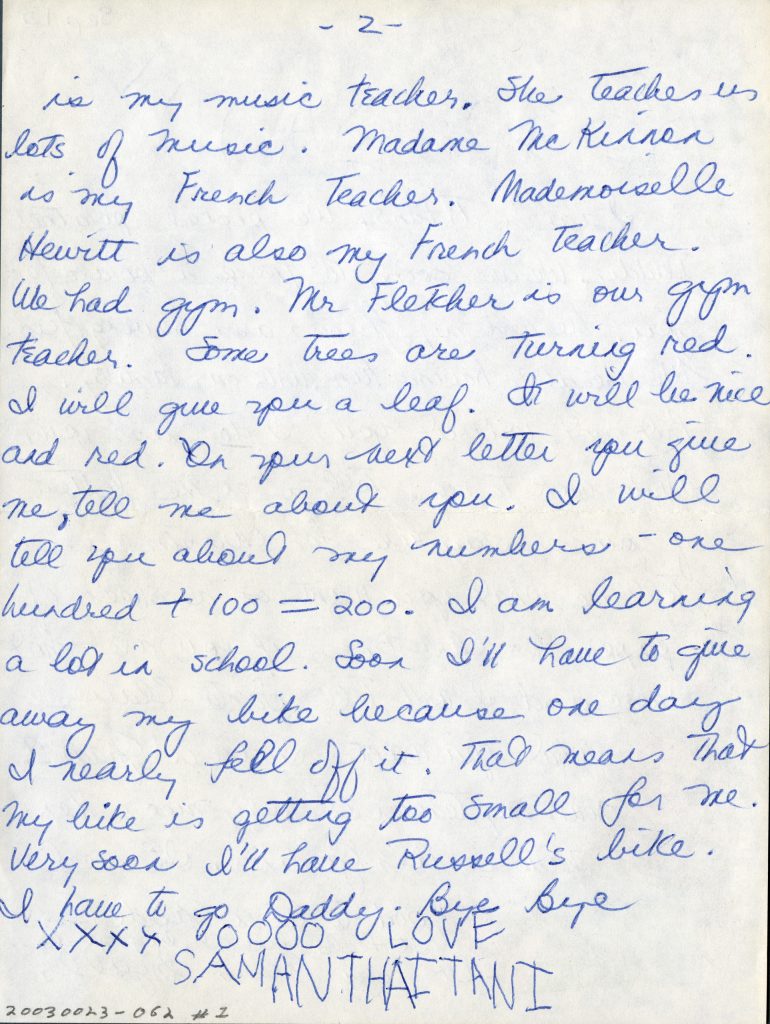 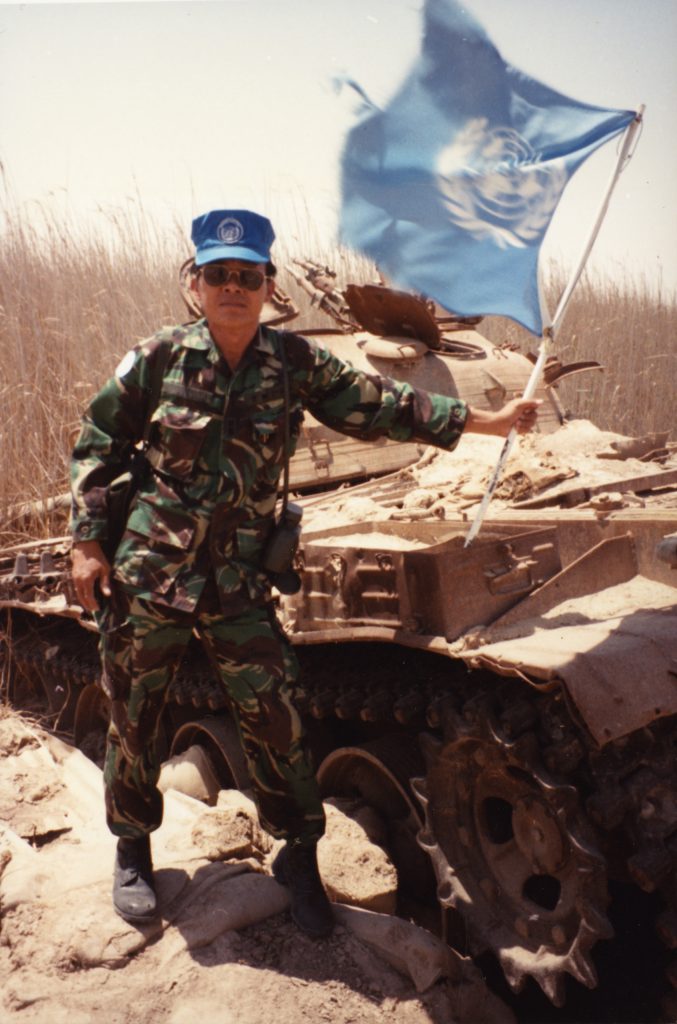 During the Second World War, fear of a Japanese invasion and suspicion of the loyalty of Japanese Canadians fueled a racist policy of forced relocation. In 1942, Tetsuo “Ted” Itani and his family were among the 22,000 people affected. Despite this injustice, later in life Itani chose to serve his country as a member of the armed forces. He served with the North Atlantic Treaty Organization (NATO) in Europe, and participated in missions in the former Yugoslavia and Iraq. Following his retirement in the early 1990s, Major Itani became an advisor and educator on peacekeeping. He received the Order in Canada in 2015.

Samantha and Russell Itani wrote these letters to their father in 1979 and 1980, when Major Itani was attending NATO Defense College in Rome, Italy. At the time, Itani was about halfway through his 37-year military career. These letters show the challenges of separation faced by service personnel and their families during training and deployment.

I have realy enjoied Chirstmas in Rome with you. I am glad you are coming home in less than five weeks. We are planning a wecoming committee just for you! I hope you like it. I also hope you will like my letter to. I have missed you very much and I am looking up to the day you come back. Love from Russell

I am in Titans. We picked potatoes Daddy. We are going to freeze a potato for you. Me and my friends are having fun. We are all having fun with our family. But not without you. I do miss you. Write back to me. Tell me on the letter if you can stay here for Christmas. Tell me what you want on a sheet of paper for Christmas if you are not here and I will tell Santa Claus what you want. I am in Grade I now. My teacher is very nice. Her name is Mrs. Gardiner. It feels good to be in Grade I. It feels like a big girl … or boy. Miss Ingalls is my music teacher. She teaches us lots of music. Madame McKinnen is my French teacher. Mademoiselle Hewitt is also my French teacher. We had gym. Mr. Fletcher is our gym teacher. Some trees are turning red. I will give you a leaf. It will be nice and red. On your next letter you give me, tell me about you. I will tell you about my numbers — one hundred + 100 = 200. I am learning a lot in school. Soon I’ll have to give away my bike because one day I nearly fell off it. That means that my bike is getting too small for me. Very soon I’ll have Russell’s bike.

I have to go Daddy. Bye Bye.