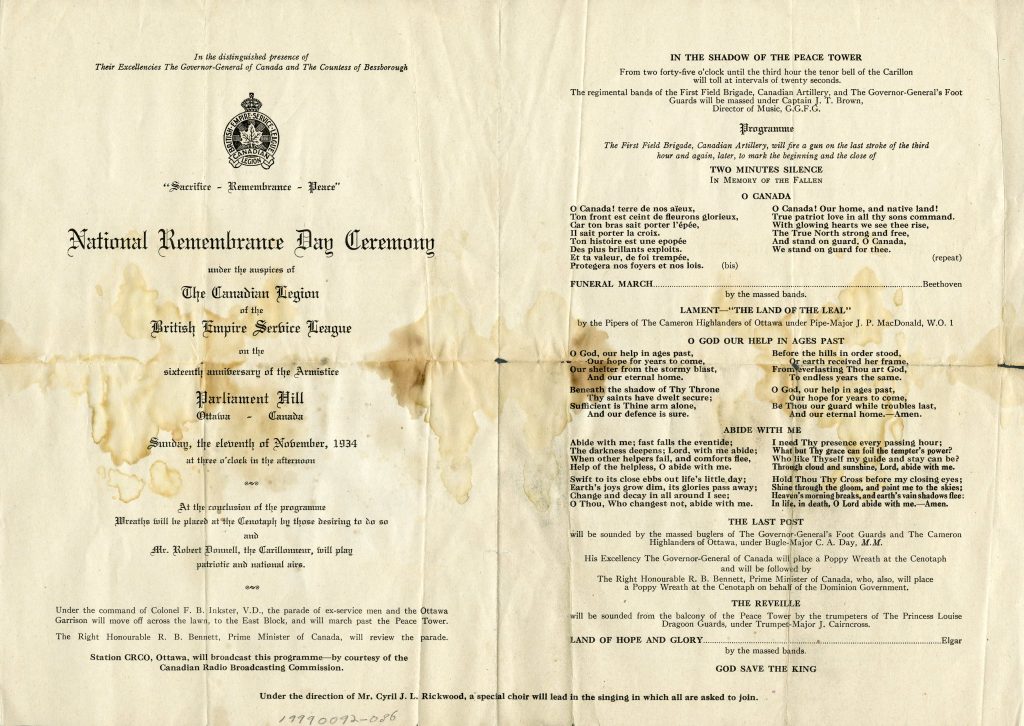 This programme lists the events and key participants in the national Remembrance Day ceremony, held on Parliament Hill in Ottawa, 11 November 1934. It includes song lyrics, inviting attendees to sing along. The National Monument would not be unveiled until May 1939.

Parliament Hill, Ottawa, Canada
Sunday, the eleventh of November, 1934
at three o’clock in the afternoon

At the conclusion of the programme Wreaths will be placed at the Cenotaph by those desiring to do so and Mr. Robert Donnell, the Carillonneur, will play patriotic and national airs.

Under the command of Colonel F. B. Inkster, V.D., the parade of ex-service men and the Ottawa Garrison will move across the lawn, to the East Block, and will march past the Peace Tower.

The Right Honourable R. B. Bennett, Prime Minister of Canada, will review the parade.

In the Shadow of the Peace Tower
From two forty-five o’clock until the third hour the tenor bell of the Carillon will toll at intervals of twenty seconds.

The regimental bands of the First Field Brigade, Canadian Artillery, and The Governor-General’s Foot Guards will be massed under Captain J. T. Brown, Director of Music, G.G.F.G.

Programme
The First Field Brigade, Canadian Artillery, will fire a gun on the last stroke of the third hour and again, later, to mark the beginning and close of
TWO MINUTES SILENCE
In Memory of the Fallen

O Canada! Our home, and native land!
True patriot love in all thy sons command.
With glowing hearts we see thee rise,
The True North strong and free,
And stand on guard, O Canada,
We stand on guard for thee. (repeat)

Lament – “The Land of the Leal” by the Pipers of The Cameron Highlanders of Ottawa under Pipe-Major J. P. MacDonald, W.O. 1

Beneath the shadow of Thy Throne
Thy saints have dwelt secure;
Sufficient is Thine arm alone,
And our defence is sure.

Before the hills in order stood,
Or earth received her frame,
From everlasting Thou art God,
To endless years the same.

O God, our help in ages past,
Our hope for years to come,
Be Thou our guard while troubles last,
And our eternal home.–Amen.

Abide With Me
Abide with me; fast falls the eventide;
The darkness deepens; Lord, with me abide;
When other helpers fail, and comforts flee,
Help of the helpless, O abide with me.

Swift to its close ebbs out life’s little day;
Earth’s joys grow dim, its glories pass away;
Change and decay in all around I see;
O Thou, Who changest not, abide with me.

I need Thy presence every passing hour;
What but Thy grace can foil the tempter’s power?
Who like Thyself my guide and stay can be?
Through cloud and sunshine, Lorde, abide with me.

Hold Thou Thy Cross before my closing eyes;
Shine through the gloom, and point me to the skies;
Heaven’s morning breaks, and earth’s vain shadows flee:
In life, in death, O Lord abide with me.—Amen.

The Last Post will be sounded by the massed buglers of The Governor-General’s Foot Guards and The Cameron Highlanders of Ottawa, under Bugle-Major C. A. Day, M.M.

The Reveille will be sounded from the balcony of the Peace Tower by the trumpeters of The Princess Louise Dragoon Guards, under Trumpet-Major J. Cairncross.

Land of Hope and Glory (Elgar) by the massed bands.

God Save the King

Under the direction of Mr. Cyril J. L. Rickwood, a special choir will lead in the singing in which all are asked to join.